It is no secret that the Washington Swamp has members of both parties. Both parties have their goals, although sometimes for different reasons. For example, both sides want illegal immigration–the Democrats see future voters and the Swamp Republicans see cheap labor. Swamp creatures in both parties hated President Trump because he was a threat to their happy existence as part of the swamp. However, most of the time the Republican Swamp Creatures were more subtle in undermining President Trump.
An editorial in The Washington Examiner may illustrate the fact that the days of subtlety are over. The editorial, basing its statements on the recent testimony regarding January 6th by Cassidy Hutchinson, a top aide to White House chief of staff Mark Meadows, states that the testimony is proof that President Trump is unfit to be President because of his temperament. Well, there are a few problems with this. Ms. Hutchinson was not actually a witness to the events she described. She heard it through the grape vine? Also Secret Service Agents working for President Trump at the time are willing to swear under oath that her testimony is false. You would think that would give the editorial staff at The Washington Examiner pause, but evidently it did not. Where are the editorials that President Biden is unfit for office because he has no idea what office he holds?

There is also another problem with Ms. Hutchinson’s testimony according to The Gateway Pundit: 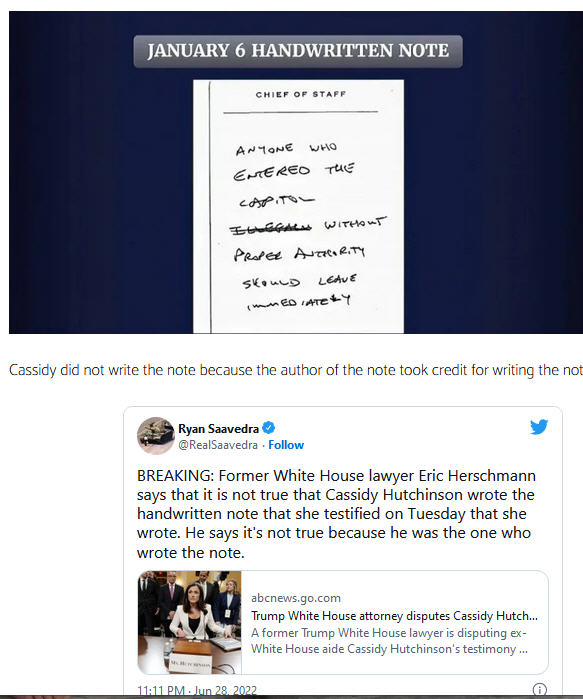 Please don’t worry–Ms. Hutchinson won’t get in trouble for lying to Congress–they liked what she said, so it’s okay.

On Tuesday, former White House aide Cassidy Hutchinson testified that former President Trump literally tried to commandeer the presidential suburban during the January 6 riot and became borderline violent when Bobby Engel tried to stop him. Hutchinson said she learned of the story from Tony Ornato, the then-White House deputy chief of staff. Hours later, Peter Alexander of NBC News said that a source close to the Secret Service indicated that agent Bobby Engel will testify “under oath that neither man was assaulted and that Mr. Trump never lunged for the steering wheel.”

The article at Breitbart included the following meme: 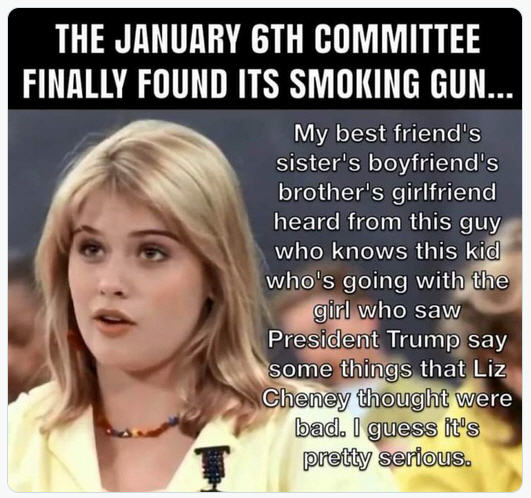 Someone is lying, and I don’t think it is the Secret Service.

Carefully edited quotes and voice-overs over video that was not related were the order of the day.

After the hearing ended on Thursday, NewsMax posted the following:

Here is a contemporary report on Trump’s condemning the attack on the Capitol published by Newsmax on Jan. 6, which was headlined “Trump Urges Peace, Protesters to ‘Go Home'”:

“The video, which Twitter first slapped with a warning that it could not be retweeted or liked due to a ‘risk of violence,’ followed about an hour after Trump posted a similar message.

“‘Please support our Capitol Police and Law Enforcement,’ the first of two posts read. ‘They are truly on the side of our country. Stay peaceful!’

“Trump added: ‘I am asking for everyone at the U.S. Capitol to remain peaceful. No violence! Remember, WE are the party of law & order – respect the Law and our great men and women in Blue. Thank you!'”

Twitter made sure that President Trump’s message of peace did not get out. When President Trump’s remarks at his rally were quoted, the committee somehow omitted the sentence “I know that everyone here will soon be marching over to the Capitol building to peacefully and patriotically make your voices heard.”

President Trump’s statement that those attending the rally were good people was superimposed over the rioters to give the impression that he supported the riots. It’s interesting that the committee chose to do that after Democrats bailed out some of the more destructive rioters from the summer of 2020. It seems to me that posting bail for rioters might actually be supporting their actions.

It is amazing to me that members of the news media, who are paying the same prices at the gas pump and the supermarket as the rest of us, are working so hard to keep President Trump from regaining the Presidency. I guess they know that he is on to them and will find ways to go around them. The crooks in Washington are afraid he will expose their crimes and hold them accountable. It’s not a good situation.

On Tuesday, Breitbart reported that former Presidential Chief-of-Staff Mark Meadows is cooperating with the House Select Committee on January 6 after being threatened with jail time if he refused to cooperate.

However, Meadows said that cooperation had been long in the works, even despite threatening comments from Rep. Adam Schiff (D-CA) touting a forthcoming January 6 committee decision on possible contempt charges for Meadows.

During an interview with Mobile, AL radio’s FM Talk 106.5, Meadows said Schiff’s remarks did not change anything and that he believed the Democrat-led January 6 Committee would be disappointed when they find former President Donald Trump and the West Wing did not have “advance knowledge” on the January 6 U.S. Capitol riot.

“It doesn’t change anything,” he said. “We’ve been working on an accommodation, Jeff, for a long time. What I told them is if I can share with the committee non-privileged information that doesn’t waive the executive privilege that Donald Trump has put forth — it is not my privilege to waive, and I’m not going to be the first chief of staff to do that. At the same time, if I can come in and share non-privileged information that I have, I’ll be glad to do that. [I’m] not going to be compelled to do it. I will be glad to do that voluntarily but if we’re going to do that, if I’m going to do that — what I think they will find is Donald Trump or no one else in the West Wing had any advance knowledge of the security breach that was going to happen at the Capitol on January 6.”

So what is this really about? If you are an American who only listens to the mainstream media, you will be convinced by the time the mid-term elections are held that January 6th was an attempted coup organized by President Trump and his gang of hooligans. That is the goal. That is also the only way the Democrats have a chance of holding on to power in Washington. If you believe January 6th was a coup or an insurrection, why wasn’t anyone armed? Also, there is a person clearly seen in the videos urging people to go into the Capitol who has been identified but not arrested. Hmmm.

I firmly believe that the events at the Capitol on January 6th were a false flag operation. The swamp knew that Trump supporters would be in Washington in numbers. All a few instigators needed to do was to get some of those supporters to break into the Capitol. When you watch the video, you see the Capitol police using flash grenades on a peaceful crowd. You also see Capital police opening the doors to let people into the Capitol. It is interesting that after four years of peaceful Trump rallies, this attack on the Capital occurred. It did not fit the pattern and needs to be looked at in that light.

A leaked phone call between Joe Manchin and a political advocacy group reveals the machinations being attempted by the West Virginian senator behind the scenes. Not only is Manchin signaling he’s open to abolishing the filibuster, but he’s also targeting specific Republicans to try to get the so-called January 6th commission passed.

…Regardless, the implications here are huge. If Manchin is now scheming to blow up the filibuster unless he gets Republican buy-in on Democrat priorities, that puts everything in a very precarious position, leaving Sinema as the last line of defense for Republicans. And while I generally like Sinema, she’s still a Democrat. Manchin’s position seems to be “let me cut your head off or I’ll cut your head off.” That’s not good news for a GOP that had been relying on him to hold the line given he’s from the reddest state in the union.

Whoever leaked this probably did it precisely because they wanted to thwart Manchin’s plan. That’s the silver lining here for Republicans. Will Manchin walk all this back when asked? We’ll find out soon enough. Some reporter is going to be shoving a mic in his face the first chance they get.

Time will tell how reliable Joe Manchin’s statement that he would vote to keep the filiibuster is.