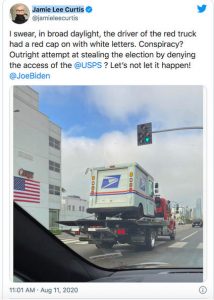 The “Halloween” star left Twitter users confused on Tuesday after peddling a conspiracy theory of enormous size and scope.

“I swear, in broad daylight, the driver of the red truck had a red cap on with white letters,” she tweeted nearly 560,000 fans while attaching an image of a damaged USPS vehicle. “Conspiracy? Outright attempt at stealing the election by denying the access of the @USPS ? Let’s not let it happen! @JoeBiden.”