The U.K. Telegraph posted an article yesterday calling the adjusting of global temperature records to support the theory of global warming ‘the biggest science scandal ever.’

Two weeks ago, under the headline “How we are being tricked by flawed data on global warming”, I (Christopher Booker) wrote about Paul Homewood, who, on his Notalotofpeopleknowthat blog, had checked the published temperature graphs for three weather stations in Paraguay against the temperatures that had originally been recorded. In each instance, the actual trend of 60 years of data had been dramatically reversed, so that a cooling trend was changed to one that showed a marked warming.

This was only the latest of many examples of a practice long recognised by expert observers around the world – one that raises an ever larger question mark over the entire official surface-temperature record.

Following my last article, Homewood checked a swathe of other South American weather stations around the original three. In each case he found the same suspicious one-way “adjustments”. First these were made by the US government’s Global Historical Climate Network (GHCN). They were then amplified by two of the main official surface records, the Goddard Institute for Space Studies (Giss) and the National Climate Data Center (NCDC), which use the warming trends to estimate temperatures across the vast regions of the Earth where no measurements are taken. Yet these are the very records on which scientists and politicians rely for their belief in “global warming”.

What ever happened to the Scientific Method?

We need to look at the reasons behind supporting the science of global warming. The poorer nations of the world (generally the ones run by tyrants who do not have equal rights for all people under their laws or property rights) have charged that the richer nations of the world have caused global warming and therefore should pay the poorer nations for the damage they have done. There is no reason to believe that any of the money paid would be used to alleviate poverty in the poorer nations, but their dictators could build more palaces. Global warming is a shakedown. It is an attempt to take money away from nations that have prospered and worked hard and give it to poor nations. I don’t object to helping poor nations, but we need to make sure any help we give goes to the people who need it–not to build more palaces for the leaders of those nations.

There is nothing wrong with moving toward ‘green’ energy. That will happen naturally when the science develops to make that move practical. Right now carbon-based energy is needed as a back-up for almost all forms of green energy because sun and wind are not constant or consistent. Until we find a way to store energy from green sources in order the keep the energy flowing at a constant rate, we will still need carbon-based fuel.

If you are interested in reading more about the science (or lack of) in global warming, I suggest two articles–one on surface stations, and one showing the actual facts about global warming in America. When you look at where some of the surface stations used to monitor temperatures were placed, you begin to wonder at the intentions of the scientists involved.

Yesterday John Hinderaker at Power Line posted a story about James Hansen, one of the leaders in the fight to convince the world that global warming is real and man-made.

It recently came out that James Hansen, one of the two or three most prominent global warming alarmists on whose work the IPCC reports rest, “forgot” to report $1.6 million in outside income, as required by his government contracts. Is that significant? Well, yes: A handful of scientists, including Hansen, have gotten wealthy on climate alarmism. They have an enormous financial interest in the faux science they have done so much to perpetrate.

Mr. Hinderaker points out that being a global-warming alarmist can be very profitable. The federal grants go to the people who claim that we are in serious danger, and the exotic speaking engagements go to the more radical proponents of global warming.

There is another aspect of this that I find extremely interesting. There is a website called surfacestations.org that shows some of the locations of the temperature gauges the global warming people are using to monitor temperature changes.

This is a sensor in Marysville, California.

This sensor is in Hopkinsville, Kentucky. Note that it is very close to both the house and the air conditioning unit. 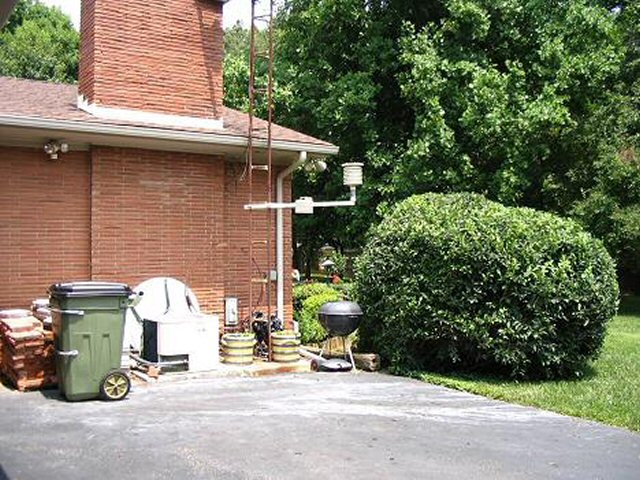 There are more pictures available at surfacestations.org.

I am probably one of the least scientific people on the planet, but even I have figured out that when you stand near an air conditioning unit, the air next to that unit tends to be a bit warmer than the air farther away.

We need to understand that there are climate cycles that occur naturally. We are not in control of the climate–either in a positive or negative way.