Northern Virginia had a weather problem this week which resulted in people being stuck in traffic in the snow for many hours on Interstate 95. It does seem as if the problem was not dealt with as quickly as it should have been, but it’s Virginia and it’s snow. The south doesn’t really do snow very well, and southerners would do well to stay home at the sign of the first flake. However, there was some interesting commentary on this event on social media.

Social media platforms like Twitter, Facebook, and Instagram have been chock full of posts over the last 24 hours or so from understandably angry folks in the Virginia/D.C. area who have either been stuck for hours on I-95 in the middle of freezing temperatures and snow on the roads or who have family members and friends who are.

The Weather Channel’s Jim Cantore, someone who you never want to see in your state because when he’s there that usually means trouble is ahead, tweeted out a map image this morning showing how long the logjam is. He noted that “some people” had been stuck in their vehicles “for over eight hours”:

Some of the social  media was confused as to who was in charge:

As the frustrations mount and the insane clips and photos of what things look like continue to roll in, some have taken to the Twitter machine to blame Republican Glenn Youngkin, who I should point out is the Gov.-Elect and won’t be sworn in until January 15th. The blame was so predominant that as I write this, “Youngkin” is trending on Twitter.

For instance, Jonah Goldberg, who we have been reliably told is a truuuue conservative or something, said on Twitter that “If I was Glenn Youngkin I’d be flooding the zone to get this I-95 crap fixed. DC suburbs are vengeful about this kind of thing.”

The article includes the screenshot below: 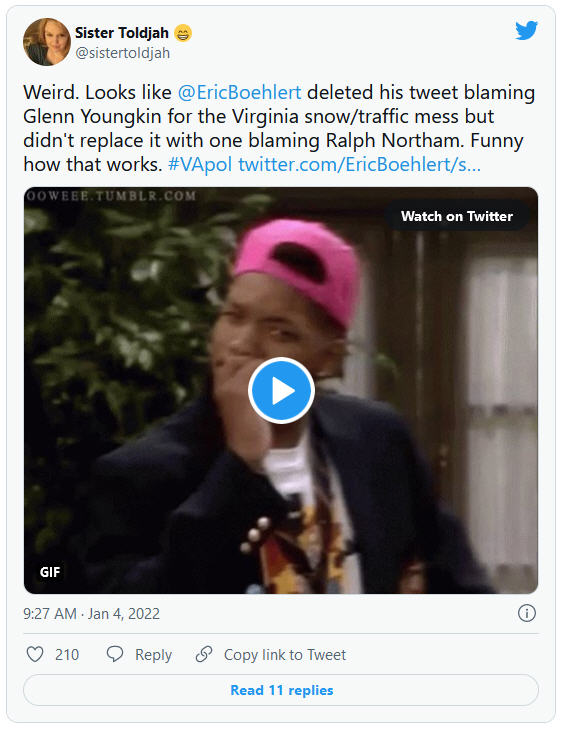 I guess you only blame the Governor for horrible traffic problems if he is a Republican.

One of the things that President Obama continues to repeat is that the infrastructure of America–our roads and bridges–is falling apart and we need to spend large amounts of government money to fix them.  I agree that many of our roads are in need of repair, I just question how effective the government will be in repairing them in a timely manner for a reasonable price.

Governor Bob McDonnell of Virginia has a different idea. He applied to the Department of Transportation for permission to place a toll on Interstate 95 in southern Virginia.

Because the toll will essentially raise money from I-95 users to pay for I-95 improvements — including out-of-state travelers — there’s no concern people will view this as an unnecessary tax, Caldwell (McDonnell spokesman Jeff Caldwell) said.

I hate the idea of a toll road, but I can see the wisdom of the plan. If the money raised by the tolls is used exclusively to fund improvements and maintenance on that specific highway, the tolls make sense–those who use the road will pay for its upkeep.
The article further reports:

Federal highway authorities approved placing tolls on Interstate 81 in 2003 under the Interstate Reconstruction and Rehabilitation Pilot Program, but that plan stalled. State Transportation Secretary Sean Connaughton lobbied Federal Highway Administrator Victor Mendez in April 2010 to shift the tolls to I-95, a more heavily traveled highway that runs the length of the East Coast.

As I said, I hate the idea of tolls, but this actually makes sense.