On Tuesday Townhall posted an article that explains where some of the money will come from to pay for President Biden’s expansive spending plans. I believe that the most recent claim is that your taxes will not increase if your income is less than $200,000 a year. Supposedly the bulk of the tax revenue will come from corporations. First of all, corporations don’t pay taxes–their customers do in the form of higher prices and their workers do in the form of lower wages. We can expect both of those things to occur. But the expansive programs will need more than corporations and earners making over $200,000 a year. That will come in the form of stealth taxes on the middle class (the people who actually do shoulder a lot of the tax burden).

The Institute on Taxation and Economic Policy posted the following graph on April 11, 2019. As you know, that was after the Trump tax cuts went into effect: 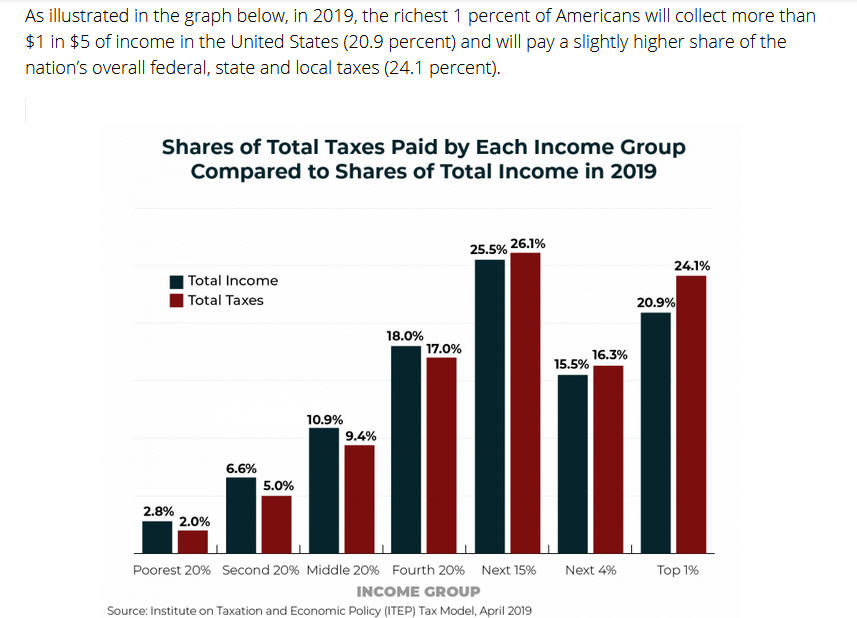 So how will the Biden administration get more tax revenue from average Americans?

The article quotes an op-ed for InsideSources written by Kelly Johnston:

You will be told that the tax plan only taxes the wealthy. Untrue. Corporations do not ultimately pay taxes – they collect them. Their “promise” won’t include intergenerational transfers of property and assets, like houses, family businesses, family farms, and stock.

Meet stepped-up basis. Here’s how that works. Say you’re a 60-year-old almost-retiree whose 90-year-old parent just passed away. You are bequeathed their Florida home acquired in 1980 for $100,000. Its value is now $500,000. Hopefully, it won’t be complicated by a reverse mortgage or isn’t burdened by other forms of leveraged debt. You sell it for $500,000. Thanks to “stepped-up basis,” you should owe no federal capital gains tax on the sale.

But what happens if all this happens after Democrats eliminate this so-called “loophole?” You’ll owe capital gains taxes on the gain in value since the property was purchased 41 years ago, most of which is probably inflation. That’s a likely 20 percent tax hit on the “gain” of $400,000 – some $80,000 to Uncle Sam. For people with incomes over $1 million, Biden may raise Capital Gains taxes to match the highest personal income tax rate of 39.5 percent.

The Biden plan may exempt the first $1 million of “unrealized” gains, but that’s a shallow threshold for many family businesses and farms. And it is not just homes or beach property. It includes stocks and family businesses.

Being allowed to keep your or your family’s own money is now a “tax loophole.”

…Whose money do the Democrats think we’re talking about? They seem to think all money is the government’s, and they’re letting you keep some of it. They clearly believe that they can spend it better than you. It doesn’t take long before that extends into other private property. Your pensions and IRAs may be next.

According to the Democrats, it’s never really YOUR money–it’s theirs to spend.