As I write this, there are a number of bills going through Congress banning various rifles, magazines, etc. Most of the weapons being banned are being banned out of ignorance–they are scary looking or are distantly related to military rifles–they are not military rifles and do not have the multiple firing capability of military rifles, but they look like them. A lot of Americans are not familiar with the various types of guns, and these laws make sense to them. These laws do not make sense in relationship to the Second Amendment and what it was about. These laws also have no relationship with the horrific event in Florida–none of these laws would have made an ounce of difference. One of the things Congress wants to ban is high-capacity magazines. According to The Daily Wire (on Friday), the Florida shooter only used 10-round magazines because the larger magazines would not fit in his duffel bag. The Daily Wire also noted that jamming is a major problem with the AR-15 platform if the weapon is not properly cleaned.

Does anyone really think that if the AR-15 had been banned that the shooter would not have used another type of gun? Also, why are we focusing on the gun when it is very obvious that had the shooter’s previous problems with the law been reported, a thorough background check would have prevented from buying a gun? I don’t know whether or not that would have stopped him–criminals seem to be able to get their hands on guns, and other weapons have been used in attacks on students. Taking guns away from innocent people solves nothing. Making sure mentally ill people who have shown that they are dangerous don’t get guns would be a much better approach.

So why do we need the Second Amendment?

On March 1st, The Blaze posted a statement from Former Secretary of State Condoleezza Rice.

Former Secretary of State Condoleezza Rice explained to the ladies on The View:

“Let me tell you why I’m a defender of the Second Amendment,” she began.

“I was a little girl growing up in Birmingham, Alabama, in the late fifties, early sixties,” she explained. “There was no way that Bull Connor and the Birmingham Police were going to protect you.”

“And so when White Knight Riders would come through our neighborhood,” she said, “my father and his friends would take their guns and they’d go to the head of the neighborhood, it’s a little cul-de-sac and they would fire in the air, if anybody came through.”

“I don’t think they actually ever hit anybody,” she continued. “But they protected the neighborhood. And I’m sure if Bull Connor had known where those guns were he would have rounded them up.”

“And so, I don’t favor some things like gun registration,” she said to a suddenly silent crowd.

“That said, it’s time to have a national conversation about how we can deal with the problems we have. It’s not going to be any single fix to the terrible events at Parkland,” she concluded.


The Second Amendment is there to protect Americans from a government that may not protect them. It is there to give Americans the ultimate responsibility for their own safety and the safety of their families.

The following is a quote regarding World War II:

I would never invade the mainland United States. There would be a rifle behind every blade of grass. — Admiral Yamamoto

There is no proof that this quote is real, but you get the idea–a country with armed, trained citizens is in a much better position to protect itself from both internal and external threats. Those who are trying to ban scary-looking guns are a threat to America’s freedom and are attempting to do something unconstitutional. What happened in Florida was tragic, but disarming law-abiding citizens will not solve anything.

On Thursday, a lone gunman opened fire at Umpqua Community College in Oregon. As usual, the College was a gun-free zone, and the gunman knew that he would meet no resistance. He is alleged to have questioned students as to their religious beliefs and shot the students who claimed to be Christians. There are no clear answers as to the roots of his hatred of Christians, but the hatred was obviously there.

President Obama immediately made a statement that included the following:

There is a gun for roughly every man, woman, and child in America. So how can you, with a straight face, make the argument that more guns will make us safer? We know that states with the most gun laws tend to have the fewest gun deaths. So the notion that gun laws don’t work, or just will make it harder for law-abiding citizens and criminals will still get their guns is not borne out by the evidence.

We know that other countries, in response to one mass shooting, have been able to craft laws that almost eliminate mass shootings. Friends of ours, allies of ours — Great Britain, Australia, countries like ours. So we know there are ways to prevent it.

And, of course, what’s also routine is that somebody, somewhere will comment and say, Obama politicized this issue. Well, this is something we should politicize.  It is relevant to our common life together, to the body politic.  I would ask news organizations — because I won’t put these facts forward — have news organizations tally up the number of Americans who’ve been killed through terrorist attacks over the last decade and the number of Americans who’ve been killed by gun violence, and post those side-by-side on your news reports.  This won’t be information coming from me; it will be coming from you.  We spend over a trillion dollars, and pass countless laws, and devote entire agencies to preventing terrorist attacks on our soil, and rightfully so.  And yet, we have a Congress that explicitly blocks us from even collecting data on how we could potentially reduce gun deaths.  How can that be?

This is a political choice that we make to allow this to happen every few months in America.  We collectively are answerable to those families who lose their loved ones because of our inaction.  When Americans are killed in mine disasters, we work to make mines safer.  When Americans are killed in floods and hurricanes, we make communities safer.  When roads are unsafe, we fix them to reduce auto fatalities.  We have seatbelt laws because we know it saves lives.  So the notion that gun violence is somehow different, that our freedom and our Constitution prohibits any modest regulation of how we use a deadly weapon, when there are law-abiding gun owners all across the country who could hunt and protect their families and do everything they do under such regulations doesn’t make sense.

This is disingenuous at best. First of all, gun ownership is enshrined in the United States Constitution. The only way the right to bear arms can be changed is through a Constitutional Amendment–it can’t be done by Congress, and it can’t be done with a pen and a phone. The Second Amendment was put there to protect Americans from a tyrannical government. It may become a critical Amendment in the future.

Second of all. The answer to shootings on college campuses is to increase security on campuses. Allow concealed carry by those who qualify. Let a potential murdered know that if he attempts to shoot up a campus, he will meet resistance.

Third of all. Violent crimes are fewer where gun ownership is not restricted. Texas, where even almost every grandmother is armed, has a lower murder rate than Chicago, which has some of the strictest gun laws in America. Criminals don’t obey gun laws–law-abiding citizens do.

The following chart was posted at National Review today: 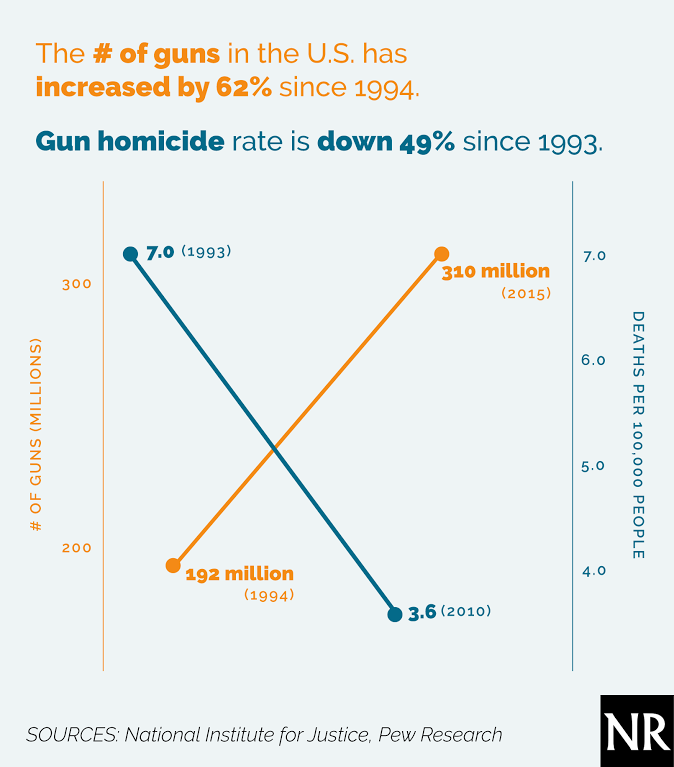 Oddly enough, more people have bought guns since President Obama was elected than in the years before. One NRA member has joking referred to the President as “Gun Salesman of the Year” on various occasions.

Seriously, the answer to the shootings at colleges is more security personnel carrying guns on campus–not less guns. To use this event to push a political agenda that is contrary to the United States Constitution is unseemly.

Yesterday The Blaze reported that Connecticut gun owners have begun registering their guns in order to comply with new gun laws that will go into effect on January 1.

Charles Gillette, who was registering magazines, told the news station that he would have a problem with it if the state was trying to ban the magazines or firearms, but said “if they want to just know where they are, that’s fine with me.”

However, not one gun owner who was registering firearms or magazines said they think the new laws will reduce gun violence.

“If people are going to do things illegally, they’re not going to be here registering their gun,” Jared Krajewski, another resident registering firearms, said.

For now, in Connecticut, the law is the law. The new gun control measures were put into place following the tragic school shooting in Newtown, Conn.

Common sense tells us that those who have nefarious future plans involving their guns will not be in line registering those guns. All this law does is put a new restriction on law-abiding gun owners–it will have no impact at all on those people who choose to ignore the law. Newtown was a horrible tragedy, but this law may be setting the stage for an even more horrible tragedy–potentially letting criminals know which households have the means to defend themselves if they are robbed.

Sometimes it is more difficult than others to be kind to people when they act like spoiled brats. President Obama lined up all the people he could find to use as props as he blamed the gun lobby for the fact that Congress upheld the Second Amendment. Thank God for the gun lobby. At some point, the President and all his allies in this need to realize that the problem is not guns–it’s the people who illegally use them. There was not one thing in the legislation that was proposed that would have prevented what happened at Sandy Hook Elementary School. Unfortunately, criminals and mentally disturbed people do not tend to obey gun laws.

The rout also vindicates Republicans who wanted the Senate to vote on the gun bill as opposed to the Rand Paul–Ted Cruz faction who sought a filibuster. For once Democrats had to declare themselves in public and couldn’t hide behind shouts of “Republican obstructionism.”

So much for the first big liberal hope of Mr. Obama’s second term. Maybe he should consider a centrist strategy from now on.