Yesterday The Washington Times posted an article about the Trump administration’s decision regarding CAFE (Corporate Average Fuel Economy) standards. The administration is freezing current gas mileage requirements rather than instituting the drastic standards put in place just before President Obama left office. Regulators required that automakers achieve an average 54.5 mpg by 2025, but they relaxed that target to between 50.8 mpg and 52.6 mpg last year. The argument against the draconian standards was that they would increase the price of a car by almost $2000 and create unemployment in the auto industry. The harsh standards would also make our roads less safe.

A draft of a regulation prepared this summer would freeze an Obama-era program that was intended to improve fuel efficiency and cut pollution.

In excerpts obtained by The Associated Press, the administration argues that heavier vehicles are safer than lighter ones and that people would drive more — and be exposed to increased risk — if their cars get better mileage.

Until we can come up with a material to make cars that is light, strong, and inexpensive, heavier vehicles are safer. American roads have many semi-trailers and trucks on them. A lightweight vehicle does not have a chance of survival in a crash with a heavier vehicle. Fuel economy is a good thing, but the safety of Americans is also very important.

On April  5, Steve Forbes posted an article at Investor’s Business Daily. The article deals with the changes being made at the Environmental Protection Agency under the leadership of Scott Pruitt.

It should come as no surprise how the man who is boldly redirecting the EPA — a once rogue agency that operated far beyond its constitutional authority — is now the subject of routine attacks from liberal news outlets and activists who want him fired. Scott Pruitt has taken his job as EPA Administrator seriously and has done more to reinstate the EPA’s true, core mission than any of his modern-day predecessors.

Pruitt’s sharp focus is correct — to restore contaminated lands, safeguard our nation’s air and water, and do so by respecting real science rather than the ideologically driven fake science of his predecessors. He is demonstrating that we can both have a cleaner environment and greater economic growth and job creation. Contrary to the extreme environmentalist, prosperity and a safer environment can go hand-in-hand.

As Scott Pruitt observes, our nation can be, “pro-growth, pro-jobs and pro-environment.”

That is a statement of a concept that has been lost by the environmental movement in recent years.

The article concludes with the accomplishments of the EPA under Scott Pruitt’s leadership:

And the notion that enforcement under Scott Pruitt’s EPA is lacking is just plain wrong. In fiscal 2017, EPA collected $1.6 billion in administrative and civil judicial penalties. That figure is higher than any of the previous ten years of EPA enforcement operations, excluding fiscal 2016.

President Trump and Administrator Pruitt rightfully believe we can protect our environment without saddling American factories, manufacturing plants and energy operations with billions in unneeded regulatory costs while offering no way to measure any improvement to the environment or our quality of life.

By halting burdensome, often duplicative regulations, Pruitt’s EPA can focus on measurable environmental protection, guided by peer-reviewed science without hurting consumers or Americans looking for skilled jobs in the energy or manufacturing sectors.

Perhaps the most important change of all, Pruitt’s EPA is now operating under the proper rule of law and staying true to its mandate and defined authority by respecting facts rather than ideological fiction. The days of a rogue, agenda driven EPA are over. Pruitt is the right man for the job and it’s no wonder the radical left is screaming for his ouster.

Hopefully Mr. Pruitt will be able to stand firm and remain to complete the job he has begun. 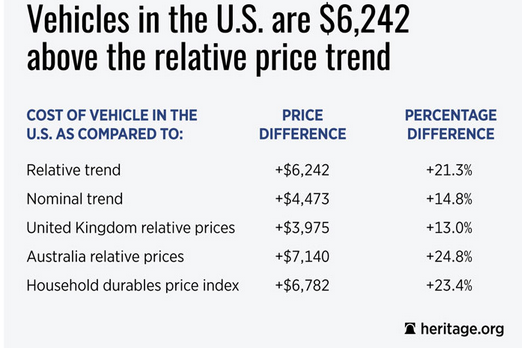 My house was built in approximately 2013. Because of when it was built, it has relatively new appliances. I wondered what was going on the first time the dishwasher took more than two hours, but now I know.

Some of the examples given:

Exhibit A: A federal rule to cut energy use of microwave ovens when they are off (this is not a joke). To reduce energy use by two watts per oven (also not a joke) the Energy Efficiency and Renewable Energy Office pushed manufacturers to adopt a technology that caused the ovens to fail 50 percent of the time in the Department of Energy’s own tests.

Exhibit B: Dishwashers with interminable cycle times. To save eight cents of hot water, federal mandates led to wash cycles taking much longer to complete. Two- and three-hour cycles, virtually unheard of 20 years ago, are commonplace today.

My washing machine also takes twice as long as my old clunker used to take.

The bureaucrats-know-better-than-consumers mindset is especially nonsensical when it is applied to businesses that relentlessly monitor energy use. Such is the case with the trucking industry, which employs GPS and a host of driver and truck monitoring technologies to shave fuel use to the minimum. A 10th of a mile per gallon is a big deal. Operators do not need federal mandates to spur cost cuts.

That isn’t stopping the federal government from pushing costly new efficiency rules on the trucking industry. Regulatory proponents, of course, claim it won’t cost a thing. The director of the National Association of Clean Air Agencies said, “The beauty of the proposal is that the cost of the necessary improvements will be paid for by the savings associated with the increased fuel efficiency.” This association of regulators either believes in free lunches or stupid executives.

What regulation mongers don’t seem to believe is that consumers and businesses can be trusted to make intelligent decisions. Maybe we need an Independence Day from busybodies.

It would be nice if the government would let the free market determine these things. I suspect we would not only have more efficient appliances, we would have appliances that performed their tasks quickly and efficiently.