Yesterday The Conservative Treehouse posted an article revealing that between 100 to 200 congressional reps and/or staff and families who contracted COVID-19 were treated with the Front Line Ivermectin protocol. 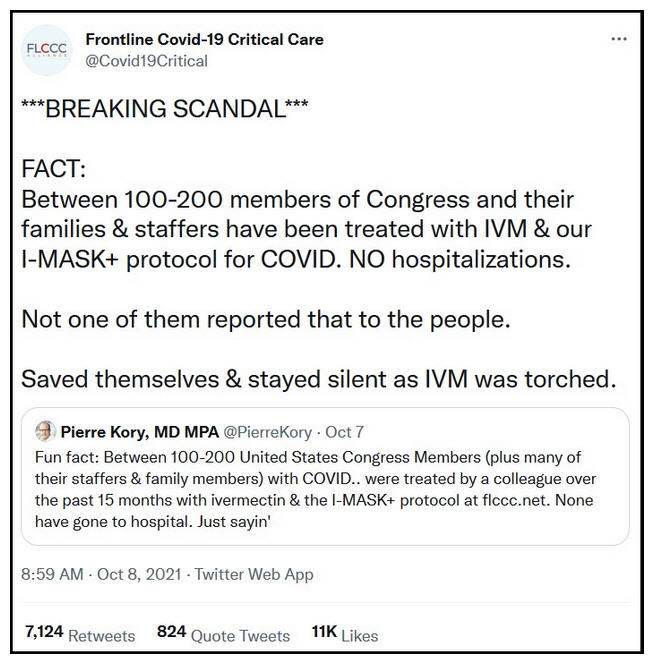 This successful treatment is happening at the same time many congressional representatives are playing politics in favor of the vaccine; downplaying the effective anti-viral treatment and therapeutic approach with Ivermectin; and taking action to block regular American citizens from seeking similar treatment with Ivermectin.

Congress can seek treatment with a medication they simultaneously deny to others?  This is well beyond a “scandal”, and needs to be investigated quickly.

Additionally, as Merck has announced a new and similar anti-viral drug called Molnupiravir, two trial studies in India have requested to exit the trials.  Apparently the issue surrounds the new drug providing no benefit once a patient is moderately ill and hospitalized (READ MORE, Reuters Link).

The article includes the following video of Dr. John Campbell highlighting a comparison between Ivermectin and Molnupiravir :

It infuriates me that ordinary Americans were denied a life-saving treatment that was used successfully by the political elite. It may be time to un-elect everyone in our government and elect ordinary citizens to replace them.

As William F. Buckley once said:

I’d rather entrust the government of the United States to the first 400 people listed in the Boston telephone directory than to the faculty of Harvard University.

I think the first 400 people listed in the Boston telephone directory might have higher ethical standards than those we have currently entrusted with our government.