Ed Morrissey at Hot Air posted an article today about what the scientific models have predicted about global warming and what has actually happened. 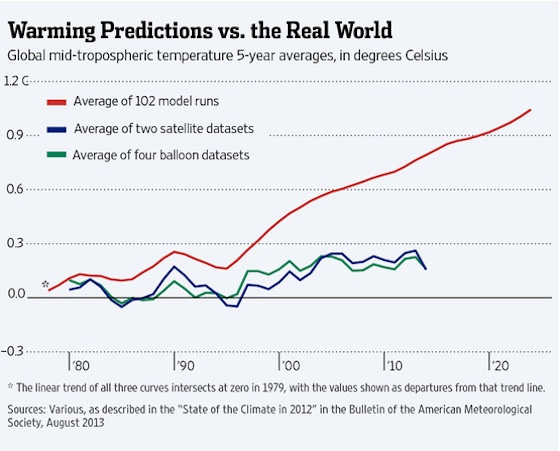 As you can see, the truth has simply not kept up with the scientific predictions.

The Wall Street Journal posted an article yesterday that stated:

“Consensus” science that ignores reality can have tragic consequences if cures are ignored or promising research is abandoned. The climate-change consensus is not endangering lives, but the way it imperils economic growth and warps government policy making has made the future considerably bleaker. The recent Obama administration announcement that it would not provide aid for fossil-fuel energy in developing countries, thereby consigning millions of people to energy poverty, is all too reminiscent of the Sick and Health Board denying fresh fruit to dying British sailors.

Before we take actions that negatively impact the economy of the entire world, we really do need to make sure that the science we are using to justify the actions is valid.

On June 25, President Obama gave a speech on the subject of climate change. He also detailed his plan (which incidentally does not include Congress) to structure America’s energy policies in order to avoid climate change.

In the process of that speech, President Obama declared, “But I don’t have much patience for anybody who argues the problem is not real. We don’t have time for a meeting of the Flat Earth Society.” I guess at some time I joined the flat earth society.

On Sunday, the Boston Herald posted an article about the President’s speech.

However, most international and national agencies have found no increase in storm activity. Warming? The alarmist British Meteorological Office finds no warming since 1998 while the carbon dioxide concentration in the atmosphere has increased by 7.4 percent.

Doomsday scenarios depend largely on unreliable computer models whose builders have no explanation for such conflicts.

The bottom line here is simple. As much as our over-inflated egos would like to think that we totally understand changes in the earth’s climate and that we can control them–we don’t. And we probably won’t for a long time. I am not against doing what is possible to control pollution. I am against using unproven science to cripple America’s energy production and economy.