This is today’s Dry Bones cartoon: 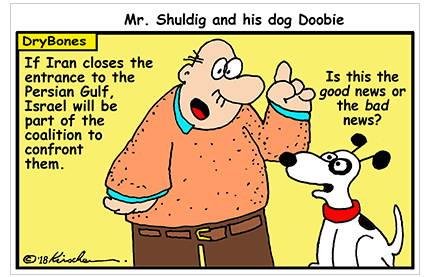 Iran’s navy sent dozens of small boats into the Strait of Hormuz on Thursday, dramatizing its ability to choke off the strategic Persian Gulf waterway — a move that could send global oil and U.S. gasoline prices soaring — and escalating the confrontation with the Trump administration for withdrawing from the 2015 nuclear deal.

U.S. officials said the naval exercise was Tehran’s way to show its capability to create a disruption in the waterway, through which some 30 percent of the world’s sea-transported oil passes daily. Officials at the Pentagon said they expected the exercise would last only a few hours, although it was unclear Thursday night whether it had ended.

“We are monitoring it closely, and will continue to work with our partners to ensure freedom of navigation and free flow of commerce,” said a statement by Navy Capt. Bill Urban, U.S. Central Command spokesman.

The development marked Iran’s latest escalation in response to Mr. Trump’s promise to begin reimposing harsh economic sanctions in the coming days that were suspended under the 2015 deal. One Pentagon source said the unexpected Iranian navy moves were meant to hammer home Tehran’s rejection of President Trump’s offer this week for direct, unconditional talks with Iranian President Hassan Rouhani.

The article details the unrest in Iran:

It is an increasingly delicate moment for Mr. Rouhani, who faces protests in Iran over the nation’s struggling economy, weak growth and declining currency.

The Rouhani government has been rocked by a string of protests in cities across the country over the failing currency, mismanagement and investor fears of U.S. sanctions, the first wave of which is set to begin Tuesday. The Trump administration is pressuring Iran’s other trading partners in Europe and elsewhere to curb trade and investment ties as well.

A report by the official IRNA news agency said about 100 people took to the streets Thursday in the northern city of Sari and that demonstrations broke out in at least three other cities. The agency reported that none of the protests had official permission and all were broken up by police.

Iranian dissident groups abroad have detailed multiple demonstrations in recent days, with harsh police crackdowns in response. The Associated Press cited videos circulating on social media purporting to show dozens of demonstrators setting fire to police vehicles and shouting “death to the dictator.” The authenticity of the videos could not immediately be verified.

One way for a dictator to unite his people is to unite them against a common enemy. This may or may not work in Iran since many of the younger people in the country are more inclined toward western ideas than the ideas of the mullahs.

“Any disruption of oil supplies in the Persian Gulf would be a major threat to the global economy and would hurt U.S. trading partners, thereby damaging the U.S. economy,” said Amy Myers Jaffe, who heads the Program on Energy Security and Climate Change at the Council on Foreign Relations.

U.S. domestic oil and gas production and export increases in recent years “have not reduced the U.S. need to police the free flow of oil from the Middle East,” Ms. Myers Jaffe wrote in an analysis for the think tank this week. “An oil price rise due to the loss of supply in one part of the world is reflected in U.S. price levels as well all other locations across the globe.”

We live in a fragile world–keep praying.

Dry Bones is a cartoon written by Yaakov Kirschen in Israel. It is an amazingly insightful cartoon, 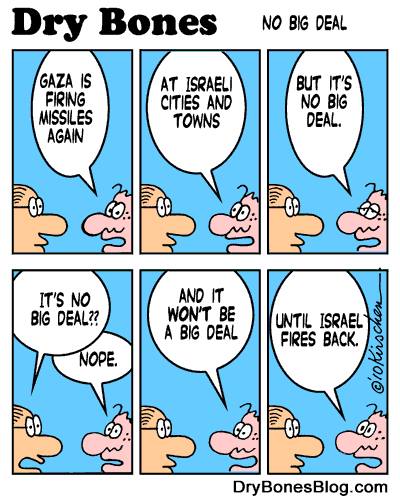