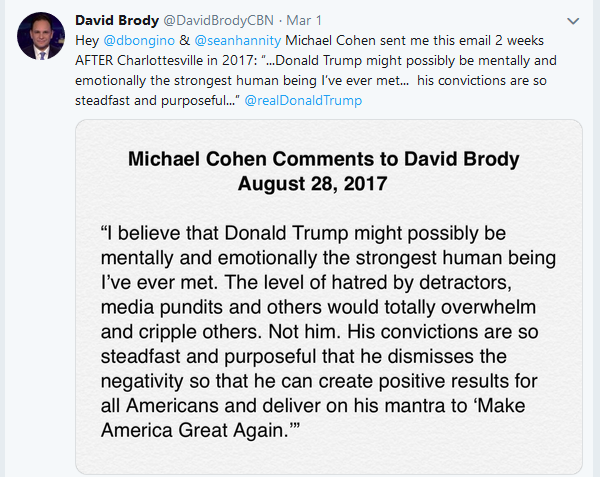 That was before Michael Cohen had his office raided by the FBI and other misconduct by the Mueller investigation. We have entered the age of the secret police, and unless someone stands up and says ‘enough’, we will continue in that direction.

One of the best analyses of this year’s Presidential election can be found on the Brody File at CBN.com. David Brody is the political correspondent for CBN and does a very concise job of breaking down the reasons for President Obama’s victory. The Brody File is a video about 30 minutes long and is well worth watching.

2. Mitt Romney was defined early by the Obama campaign–not by the Romney campaign. In April, May and June, the Obama campaign ran personal attack ads directed at Mitt Romney defining him as a rich businessman from Bain Capital who was going to ship everyone’s job overseas. He was accused of everything from causing a man’s wife to die of cancer to animal abuse. The Romney camp did not respond to the charges at the time, and that image of Mitt Romney was established.

For me, the bottom line in this election is the split between the Republican establishment and the Tea Party. I voted for Mitt Romney. He is a good man who would have done a good job. However, I would have preferred a candidate who was more clearly a conservative. I believe a true conservative would have beaten Barack Obama.

I seriously doubt that the Republican establishment has learned from this experience. I suspect that when the new Congress convenes in January, it will have the same Republican leadership. Until we get the establishment out of Washington–both Republican and Democrat establishment–we will continue down the path we are currently on. The definition of insanity is doing the same thing over and over again and expecting different results. Right now that is a pretty good description of the American voter.