On Wednesday, comedian Dave Chappelle was attacked on stage during his Hollywood Bowl concert. Obviously there were thousands of witnesses. The attacker used a knife hidden inside a gun.

On Thursday, The U. K. Daily Mail reported the following:

LA’s woke DA George Gascon will not pursue felony charges against the attacker who stormed Dave Chappelle’s Hollywood Bowl concert with a bayonet, reducing the charges to misdemeanor instead.

Isaiah Lee, 23, ran on stage at the show on Wednesday yielding the knife that was hidden inside a gun.  Chappelle, 48, was able to sidestep him and was unharmed. The attacker was then arrested at the scene, and taken to hospital with a broken arm.

There were immediate questions over security at the event and how the man could have smuggled in the weapon.

If the attack had been successful and the comedian killed, would it still be a misdemeanor?

But Gascon’s office – which is famously in favor of low-or-no-cash-bonds – is not pursuing the most serious line of punishment.

Instead, they have referred the case to the LA City Attorney Mike Feuer,  recommending a misdemeanor charge because ‘the evidence as presented did not constitute felony conduct,’ according to ABC.

It means Lee, who is currently being held on a $30,000 bond for felony assault with a deadly weapon, may soon walk free. It’s unclear when he is next due in court.

The article also includes a chart showing the impact of the changes District Attorney Gascon’s criminal policies have had on crime this year: 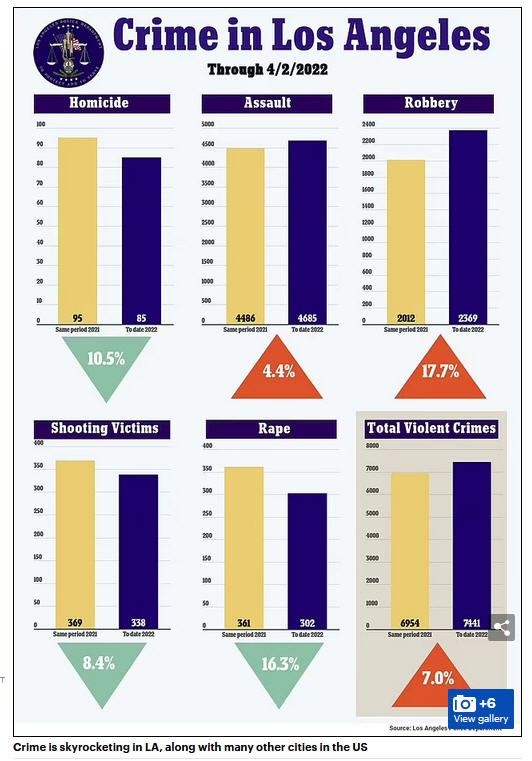