Yesterday The Gateway Pundit posted an article about something Alexandria Ocasio-Cortez recently retweeted. The original tweet was supposed to point out a problem with voter ID laws. Instead, when you looked at the actual facts, the policy in place makes sense. 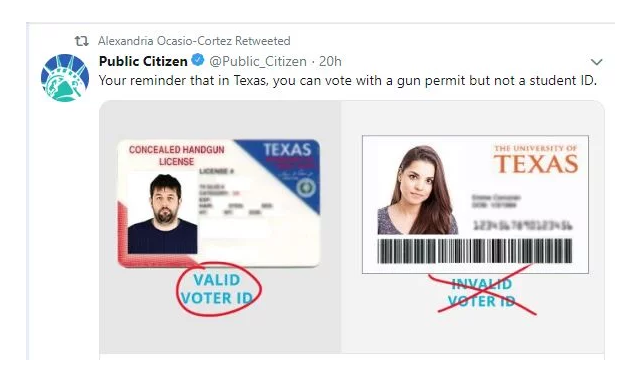 There is another aspect to this story. Breitbart is reporting today that the man who shot up the church had been denied a Texas concealed carry permit.

USA Today failed to mention that in their rather biased reporting

USA Today chided Texas for “lax” concealed carry laws after the Sutherland Springs church shooting but the attacker, Devin Kelley, was denied such a permit.

Mr. Kelley had been denied a concealed carry permit–stricter gun laws would not have mattered in this case because he was not interested in following the gun laws (or the laws against murder). Other sources indicate that he should not have been able to pass any kind of background check to purchase a weapon as he had previously been convicted of domestic violence. There is no way under current gun laws he should have been able to purchase a gun. His rampage was stopped short by a citizen with a gun permit.

Unfortunately we will never find a way to stop criminals (or those with criminal intent) from obtaining guns illegally. Therefore it makes no sense to deny law-abiding Americans the ability to defend themselves. Thank God there was a legally armed citizen to stop the rampage.

I have mentioned more than once in this blog that the gun culture of the south is unfamiliar to me. I am rapidly coming to the point where I will apply for a gun permit and get a concealed carry permit. My husband is already there. I don’t like the idea of having to defend myself with a gun, but unfortunately there are people walking around in America who do not respect the property and lives of their fellow Americans. There were four stories cited in the past week that show the need for average citizens to be prepared to defend themselves.

In Detroit a man attempted to use pepper spray on a dog that attacked his dog. When the pepper spray had no effect, he shot the dog, saving his dog and possibly himself from injury.

The final story involved a man in Georgia. On Christmas night Antonio Bagley shot a man who attempted to rob him. Had not Mr. Bagley carried a concealed gun, the story would have had a different ending.

Most of us have grown up in a world where we depended on the police to keep us safe. The police do a good job, but they cannot be everywhere at once. Americans have to take responsibility for their own safety. I don’t like this, but I suspect it is where we are and where we will be for at least a while.