Yesterday The Gateway Pundit reported that Democrats are refusing to allow Republican lawmakers to view the transcripts from the impeachment proceedings. What manner of justice is this?

Democrats refuse to allow Republicans ANY CONSIDERATION in the entire process. They will not allow Republicans to call ANY witnesses. Democrats are only leaking tidbits that help them to the media.  And Democrats are NOT EVEN CALLING on their main witness — a partisan anti-Trump CIA officer who was spying on President Trump in the White House and who has NO DIRECT KNOWLEDGE of the president’s specific phone call to the Ukrainian leader. The leaker’s only evidence is hearsay that has already been debunked by the released transcript of the phone call.

And now this…
Democrats are already losing their battle with the truth and with the public.
Americans know they are hiding and lying.
Every top swing vote state, by wide margins, do not approve of this sham impeachment process of President Trump.

Rep. Andy Biggs (R-AZ): The reality is when you close the doors, you’re saying we don’t trust anybody but us to get to the truth. And they’re actually, the word came out tonight, they’re not even going to let these guys, members of the committee, get access to the transcripts anymore.

Rep. Lee Zeldin (R-NY): they want to be able to prepare their report. And they don’t want to let us to get the rest of the information out. So this is not a level playing field…

THESE PEOPLE ARE LAWLESS!

The Republicans in the Senate can call witnesses. Why haven’t they?

The pettiness in Washington is getting totally ridiculous. We have reached the point where if President Trump endorsed the idea of Democrat  Congressmen wearing suits to work, they would all show up looking as if it were casual Friday. There have always been political differences in Washington, but the ‘resistance’ has reached a really unhealthy level.

Paul Mirengoff posted an article at Power Line today about the confirmation process of William Barr for Attorney General.

The vote in the Judiciary Committee was 12-10. Every Democrat on the Committee voted against Barr.

This is the same William Barr whom the Senate confirmed unanimously three times during the Reagan-Bush years. The last of these times, when Barr was nominated to be Attorney General under Bush, the Judiciary Committee approved him by unanimous vote, and the full Senate confirmed him by a voice vote.

Barr was confirmed unanimously even though he testified that Roe v. Wade was incorrectly decided. Joe Biden, then the chairman of the Judiciary Committee, praised Barr for his candor. Biden added that Barr, who had been serving as Deputy Attorney General, as “a throwback to the days when we actually had attorneys general that would talk to you.”

This time around, Barr received no votes from Committee Democrats. In all likelihood, he will receive virtually no Democratic votes on the Senate floor.

The Democrats’ unanimous opposition to Barr isn’t about Mueller, a personal friend of Barr. Rather, it’s the product of their resistance to President Trump. Indeed, any number of Trump appointees have been approved without any Democrat support or with virtually none.

Accordingly, the next time a Democrat is president, Republicans will be well within their rights unanimously to oppose his or her nominees. They should exercise this right freely, though not indiscriminately.

If Republicans happen to control the Senate, meaning that the nominee can’t be confirmed without some GOP votes, this should not deter them from saying no. I suspect it will deter a few GOP members, but it shouldn’t.

This is no way to run a country. It is also pointless. The Republicans have enough votes in the Senate to pass the nomination. The ‘resistance’ simply looks stupid and petty. If I were a Democrat in the Senate, I might want to consider the concept of karma before I voted no.

Last Thursday I posted an article about a public meeting of a joint legislative committee in North Carolina that is studying Common Core (rightwinggranny.com). Today Representative Larry G. Pittman of the North Carolina General Assembly House of Representatives released the following newsletter: 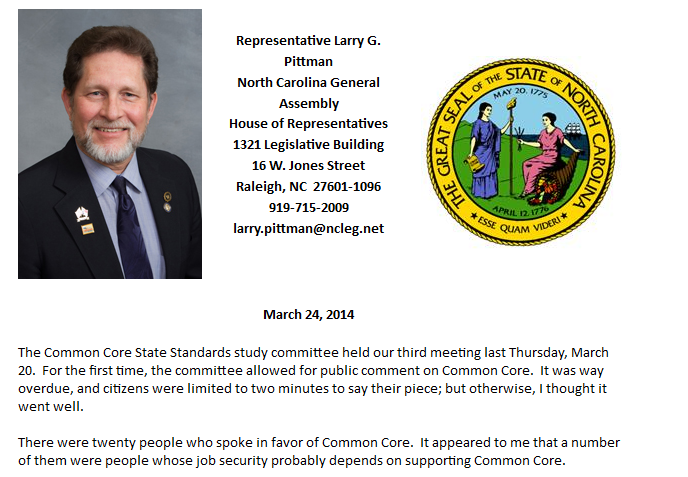 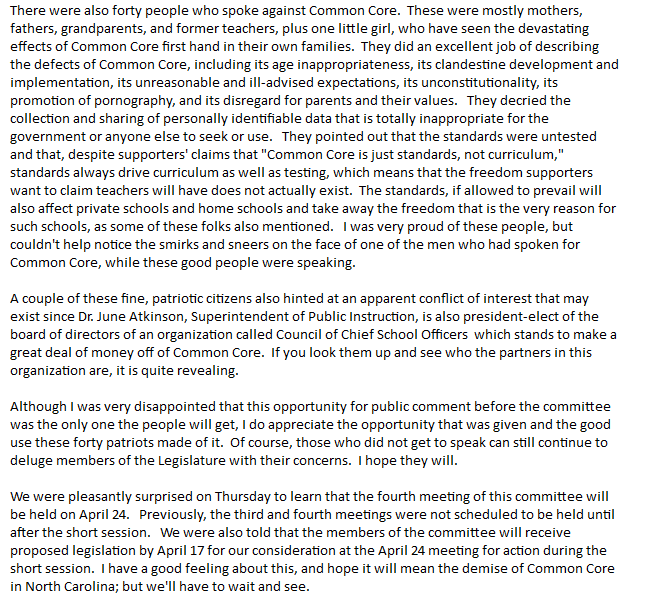 If your state is considering the Common Core standards, take heart. You do have a voice. If the public speaks out against this federal take-over of our education system, Common Core can be stopped.

A song from the move “Alone But Not Alone” was nominated for an Oscar for song of the year. Shortly afterward, the nomination was withdrawn, citing emails the songwriter sent to friends asking them to listen to the song. There is a question as to the real reason the song was disqualified. You can find some of the discussion of the issues at The Hollywood Reporter, but I am not going to say a lot about this because I really don’t understand the rules and regulations of Oscar nominations.

However, the song is beautiful, and YouTube posted the video. Enjoy: