Do you need two sides to debate an issue? Evidently NBC News doesn’t think so. Yesterday The Washington Times posted an article about the debate on climate change.

NBC News has decided that climate change is no longer an issue that has two sides.

Sunday’s episode of “Meet the Press” with Chuck Todd featured an hourlong panel with lawmakers and scientists about the consequences of climate change. But at the start, Mr. Todd said his show is “not going to give time to climate deniers” and went on to inaccurately characterize the nature of the climate debate.

“We’re not going to give time to climate deniers,” Mr. Todd added. “The science is settled even if political opinion is not.”

Skeptics about some of the most alarmist climate-change scenarios drawn by former Vice President Al Gore and other Democratic and left-wing politicians bristle at the word “denier,” claiming it implies parallels to people who claim the Holocaust or the Sept. 11, 2001, terror attacks didn’t happen.

The article continues with the supposed justification for not allowing a second opinion:

“We need to stop covering the debate and start covering the story so that people see that this is real, and so that politicians take a more pragmatic approach and find solutions that are actually achievable,” Mr. Curbelo said about the one-sided discussion.

Other politicians applauded the well-parametered show, with Sen. Bernie Sanders who took to Twitter to offer “congratulations to Chuck Todd and Meet the Press for holding a serious discussion about climate change.”

“Will this be a breakthrough moment for mainstream TV?” the Vermont socialist asked.

How can it be a serious discussion if one side is censored?

Just for the record, below is an illustration of the Scientific Method as found at Science Buddies: 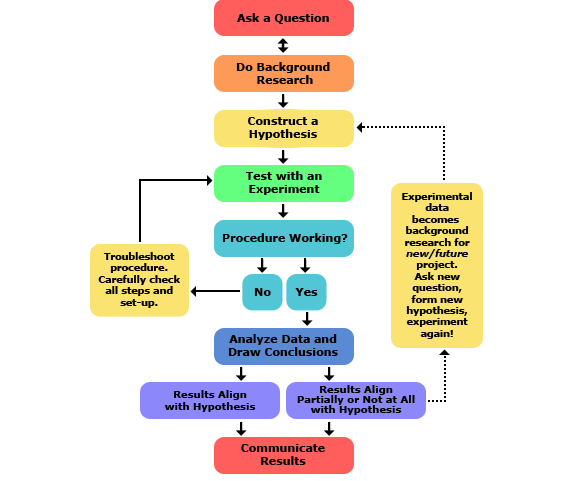 I don’t see anything on there that says don’t let anyone who disagrees with you speak!

The Blaze posted a story today about the Obama Justice Department that even surprised me. The article involves Congressional testimony by Attorney General Loretta Lynch. Attorney General Lynch states that the Department of Justice has looked into the possibility of prosecuting climate deniers under RICO statutes.

This is the same Department of Justice that has not prosecuted Hillary Clinton for blatant violations of rules governing the handling of classified material. Under President Obama, Attorney General Loretta Lynch has become the head of the Department of Injustice.