Steven Hayward posted an article at Power Line today about a recent “Working Glossary of Terms” put out by the University of Washington. In this exercise in absurdity, the students are asked to identify themselves by gender. When you look at the list of options, male and female are not included. Instead, students are given the option of “Cisgender,” meaning “describes someone who feels comfortable with the gender identity and gender expression expectations assigned to them based on their physical sex.” Wow. I never realized that my gender was assigned. I never realized I had an option. Does this mean that my husband could have done the pregnancies? It would have been much easier–he has a cast iron stomach.

Some of the students answered the question with the terms ‘male’ or ‘female,’ which were considered microaggressive terms (the students obviously had more brains than the administrators).

This is the response from the administration: 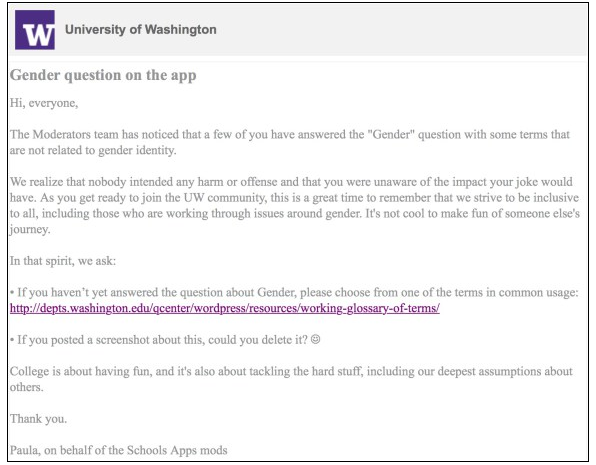 Parents, what are you paying for? I wonder how many parents have any idea what is being done to their children in the name of education.