One of the groups targeted by the IRS was True the Vote. I first became aware of True the vote and its founder, Catherine Engelbrecht, in September 2010 (rightwinggranny.com). The group’s effort was directed toward ensuring that the voting in Harris County, Texas, included only people who were entitled to vote. They have continued their efforts to ensure the integrity of American elections.

Breitbart.com is reporting today that True the Vote has gotten involved in the recent Republican primary held in Mississippi. Republican establishment candidate Thad Cochran defeated conservative Chris McDaniel in a primary run-off election. Mississippi voting laws state that a person who voted in the Democrat primary election this year is not eligible to vote in the Republican run-off election. There are some real questions as to whether or not that law and other voting laws were enforced.

“All we are asking is that the MS State Republican Party follow the law; allow their designated county representatives to inspect the poll books and ballots, give them the review time they are permitted by law, and allow them to uphold their responsibility to MS voters,” True the Vote president Catherine Engelbrecht said in a statement about the suit. “True the Vote has been inundated with reports from voters across Mississippi who are outraged to see the integrity of this election being undermined so that politicos can get back to business as usual. Enough is enough.”

True The Vote wants the federal judge to order the state party and Secretary of State’s office to allow independent verification of the election results to ensure there were no “illegal votes.” Such votes could come as fraudulently cast absentee ballots—the runoff saw a massive spike in absentees over the primary a few weeks earlier—or by Democrats who voted in the June 24 GOP primary runoff after having voted in the June 3 Democratic primary. Other potentially fraudulent votes could come from Democrats voting in the Republican primary who don’t intend to support the Republican they voted for on June 24 in November’s general election, though intent is difficult to prove. There are further allegations of vote-buying surfacing this week.

National Review Online posted a story today about Mitzi Bickers, who played a major role in Thad Cochran’s primary victory in Mississippi. Ms. Bickers is a Democratic staffer and political strategist. Last year, she left her job as a senior adviser to Atlanta mayor Kasim Reed after news surfaced that she had filed a fraudulent financial-disclosure statement.

In a bizarre turn of events, it seems that Bickers was in the middle of a bitterly contested Republican Senate primary. Two Atlanta-based entities affiliated with Bickers, The Bickers Group and the Pirouette Company, were paid thousands of dollars to make robo-calls on Senator Cochran’s behalf by a super PAC that backed Cochran in his bid for reelection. Documents filed with the Federal Election Commission show that Mississippi Conservatives, the political-action committee run by former Mississippi governor Haley Barbour’s nephew Henry, paid the groups a total of $44,000 for get-out-the-vote “phone services.”

It is becoming very clear that some Republicans are as opposed to the Tea Party as the Democrats are. Why? Because some of the Republican establishment has morphed into a Democrat Light party and has lost its way. The Republican establishment no longer adheres to the principle of smaller government and individual freedom. They have joined the Democrats in supporting the status quo and consolidating power in Washington.

The Republican Party needs to get back to its roots and its platform if it intends to be a political force in the future.

The Corner at National Review posted a picture of the flier that Thad Cochran passed out before the Mississippi Republican primary election. 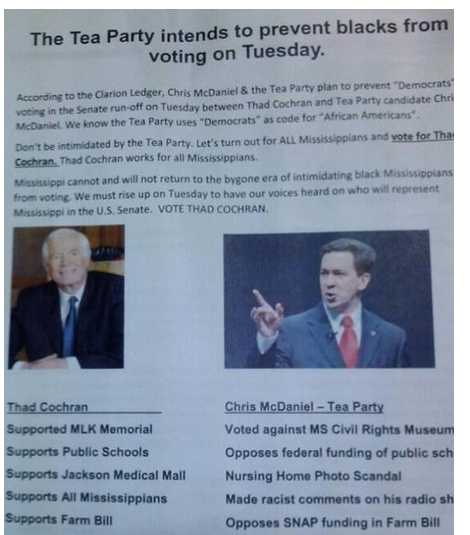 I am ashamed that a Republican ran this sort of campaign. However, this campaign would have been much less effective on an educated voter base. In the end, the voters are responsible for who they send to Washington. As much as I hate to see Harry Reid stay in power, I hope Senator Cochran loses in the general election. This is a disgrace. It is also a reason conservative Republicans should stop giving money to the Republican Party, but only donate to individual candidates.

The Democrats have branded the Tea Party as racist as a way to undermine the message of smaller government and lower taxes. It is a shame that some establishment Republicans have chosen to echo that message. The Tea Party represents the only hope of change in Washington. That is why the political class is so opposed to their message.