The Coastal Carolina Taxpayers Association held their first Back the Blue event this morning outside City Hall in New Bern, North Carolina. There were about thirty people holding signs supporting our local police. The group then moved to Union Point Park where various elected officials spoke–Representative Michael Speciale, Senator Norman Sanderson, and New Bern Chief of Police, Toussaint Summers. There were a number of other speakers with law enforcement backgrounds who expressed their gratitude to the group for their support. The featured speaker was Mark Robinson, a candidate for Lt. Governor.

Mark Robinson spoke about the need for conservatives to get involved in government in a positive way. We need to participate not only by voting, but by serving on school committees and various other government entities. 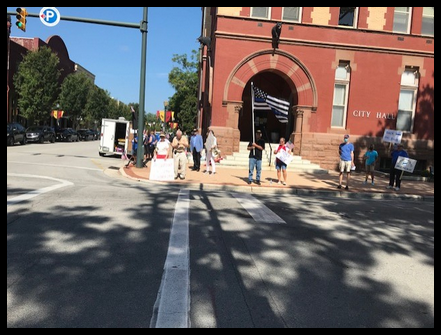 The CCTA will hold an event at 7 pm at Stanly Hall tonight to honor some of the outstanding policemen from our area.

Ferguson continues to have problems finding peace and healing. Somehow the death of a young man who robbed a store has resulted in riots and looting. The witness accounts of the events contradict each other–the young man’s accomplice claims that Michael Brown was surrendering to the police. Other witnesses say that he was charging the policeman. There are some serious questions regarding the initial event that preceded the riots, and there are some serious questions about the actions of various people since the trouble began.

Yesterday the Independent Journal Review reported that the release of the video of Michael Brown committing a robbery minutes before he was shot was delayed due to pressure from the Department of Justice.

The article cites a CNN report:

…Friday’s release of the store-theft video by Ferguson police occurred over the objections of federal authorities, a law enforcement official told CNN on Saturday.
Ferguson police had wanted to release the video Thursday but held off when the U.S. Justice Department asked them not to, arguing that doing so would increase tensions in the community, the source said.
But Ferguson Police Chief Thomas Jackson released it Friday, announcing for the first time that Brown was suspected of stealing cigars from Ferguson Market and Liquor shortly before noon August 9, minutes before Wilson encountered and shot him.

The release of that video might have calmed things down early on by shattering the myth that Michael Brown was a model child. Most model children do not rob stores.

So what is all of the rioting, looting, and protesting about? Well, it keeps the news away from the genocide of Christians that is happening in the Middle East. It might distract people from the fact that the middle class is losing ground financially. It might cause people to forget the disaster of ObamaCare and other failures associated with the Obama Administration. If the American people can be distracted by the general mess the country is in right now, they might be inclined to vote for Democrat Congressional candidates. Those are just a few suggestions as to what the extensive reporting of the trouble in Ferguson might be about.

One last thought. An electorate united to clean up Washington would be a serious threat to the Washington establishment. An America that is divided along racial, economic, social, or other lines is no threat to those politicians who are in politics simply for their own gain. A well-educated, united electorate could make a positive difference in the direction of America. The people who are stirring up divisions among us may have a different agenda.

One of the current problems with ObamaCare is that there is no way to verify a person’s income when they ask for a government subsidy to help pay for their health insurance. One aspect of the negotiations currently taking place in Washington is making sure that the people applying for subsidies are actually entitled to them. Generally speaking, can we trust people to take only what they are entitled to? Well, recent events indicate that we need to verify.

Yesterday MSN Money reported that there had been a computer glitch in the Electronic Benefits Transfer (EBT) transfer card system and that stores had no way of reading the balance on the cards. The article reports what happened at one Wal-Mart.

Lynd explained the cards weren’t showing limits and they called corporate Wal-Mart, whose spokesman said to let the people use the cards anyway. From 7 to 9 p.m., people were loading up their carts, but when the cards began showing limits again around 9, one woman was detained because she rang up a bill of $700 and only had .49 on her card. She was held by police until corporate Wal-Mart said they wouldn’t press charges if she left the food.

Lynd (Springhill Louisiana Police Chief Will Lynd) says at 9 p.m., when the cards came back online and it was announced over the loud speaker, people just left their carts full of food in the aisles and left.”

Unfortunately there are people among us who have no problem taking something they are not entitled to. To put a government program in place that promises benefits without checking eligibility is simply stupid. There will always be people trying to game the system, we don’t have to make it too easy!