The statistics and information in this article have been taken from the State of North Carolina Department of Public Instruction Website.

Since Common Core was introduced in North Carolina, people with a vested interest in its success have been reporting statistics to justify its existence. Some of these statistics look really good; but when you analyze the data, you find that things are not what they appear to be. In other words, the acceptable standard has been altered to make the results appear better than they actually are. (See chart below.) 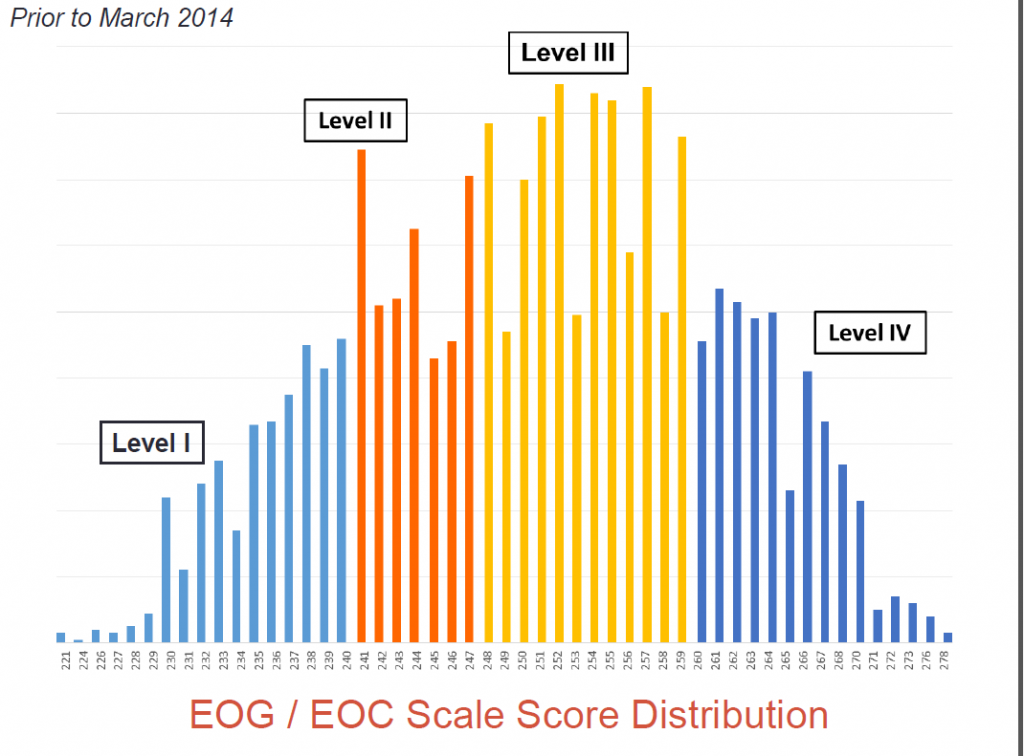 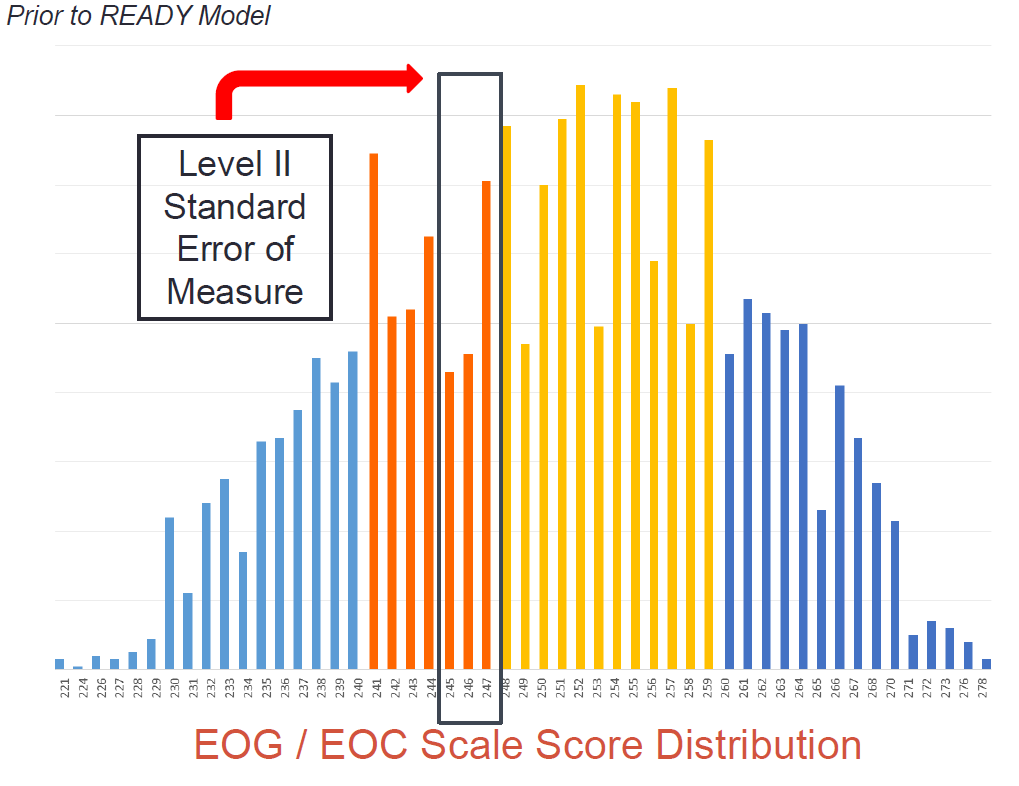 As you can see, Level 3 now includes what was previously the top half of Level 2. In October 2013, the State Board of Education adopted four academic achievement levels. In March of 2014, an additional achievement level was added, for a total of five levels. The current five levels are:

What was previously the top half of ‘partial command’ has been moved to ‘sufficient command.’

The new standards have not raised the educational achievement of North Carolina students. The reporting has not accurately reflected the impact Common Core has had on our students–they are not doing better–the method of reporting test scores has simply been altered to make it appear as if Common Core is providing a higher level of college and career readiness. As you can see from the charts above, that is not the case. The numbers have been changed to protect the politically connected.

Representative Larry Pittman is a member of the North Carolina General Assembly. This is his update on the status of Common Core in North Carolina:

Common Core…what really happened. Okay, most of you probably know that I am the one who started the fight against Common Core in the NC House by running a study bill. I actually wanted to go ahead and run a bill that would just get rid of Common Core, plain and simple; but not enough legislators knew enough about it to get on board with that. So I had to settle for a study bill, instead. Of course, since none of my bills were allowed to be heard in committee, they put forward a larger study bill which included establishing a study committee, instead. Michael Speciale and I were allowed to serve on that committee.
The study committee produced a very weak bill, which appeared to be about getting rid of Common Core, but which I felt actually left open the possibility of simply rebranding it. This bill was authored by Sen. Tillman, who had asked early on in the meetings of the committee whether we couldn’t just take the name Common Core out of our statutes and call it something else. I went ahead and voted to report it out of committee, but knew I would have to work to improve on the bill.
Michael Speciale, Bryan Holloway, and I were doing just fine making the bill stronger, when all of a sudden, Craig Horn, who had expressed support for Common Core early on, showed up at one of our meetings with a different version that removed some of the language I had written into the bill. So I submitted another version that added my language back into the bill. As I recall, this happened twice. In all, I submitted four versions of the bill before Craig agreed to leave my language in it.
Before we were through, Craig wrote something like 23 versions of the bill. The final version still had my language in it that would make sure that going back to Common Core and simply rebranding it was not an option. I never said or intended that if a way of doing something that was in Common Core happened to be a good idea we couldn’t use it; but I was urgent about making sure that if we did, we should reword it to avoid copyright violations. My main concern was that whatever we do would end a lot of the foolishness that is in Common Core. I was insistant upon not using assessment sources that were tied to Common Core. I also wanted to make the commission we were creating permanent, with the idea that it would be a watchdog to make sure DPI and the State Board of Education did not pull another fast one on us like Common Core, and that we never get ourselves entangled with further federal control of our education system.
Well, the result of all this work was HB 1061, which passed the House with a strong majority. When SB 812 came over from the Senate, we also got strong support in the House to remove the weak language of that bill and replace it with what was in HB 1061. This, too, passed the House with a strong majority. If we could have gotten the Senate to go along with us, I could assure you that we would be driving a stake through the heart of Common Core in North Carolina.
When the Senate failed to concur with the House version of SB 812, that caused the issue to be sent to a conference committee. As the one who started all of this, you might expect that I would be on that conference committee. However, I was not allowed to serve on it. Michael Speciale was on the committee, and I’m sure that he did his best to contend for what we had done. I appreciate him so much, and he should be commended for his efforts. However, he was outnumbered and outvoted.
The end result is a bill two pages shorter than HB 1061. The lack of those two pages is the result of the Senate insisting on removing everything I had put into it to make clear that continuing with Common Core is not an option. The bill as we finally passed it does repeal Common Core from our statutes, and has the potential to lead to the end of Common Core in our State. In the end, I had to vote to concur because I felt that if we didn’t pass something this year, it would be next to impossible to come back next year and start from scratch. At least with this bill, we do have a basis for coming back later to push for further reforms, if need be. While it does not call for rebranding Common Core, I fear it leaves that option open. So we must be watchful and ready to resist such an outcome.
Finally, considering what was removed from the bill, and considering the fact that Gov. McCrory, a strong advocate of Common Core, has already essentially said that he can sign it because it doesn’t change anything, I do not have a lot of confidence about what will happen. I got this thing started because I heard the cries of parents and children who have been victimized by Common Core. I heard from some teachers who sounded the alarm, also, and was told about many other teachers who were afraid to speak of their opposition to Common Core for fear of losing their jobs. If that is the case, something is really rotten about the whole affair. I fear that, in the end, the voice of wealthy special interests spoke louder than the voice of the people who suffer under the curse of Common Core. While good could come from what we finally passed, I believe the opponents of Common Core should stay on the alert. We haven’t necessarily won yet. There may be more to do.

Please do your homework on Common Core. If you are not a parent with children in school, talk to a parent who has helped their child with Common Core math homework. Aside from being an unconstitutional federal takeover of education, the Common Core includes data mining of children without proper security protection of the information. It also includes questions asked of the children regarding their parents’ religious beliefs and gun ownership. That information is none of the school or the government’s business.

The North Carolina state legislature has listened to concerned parents and teachers who opposed Common Core.

At the fourth and final meeting of the NC General Assembly’s Common Core study committee, a bill was unveiled that will remove Common Core from the state’s statutes. The bill also calls for a return to North Carolina Standard Course of Study, which will be developed by an academic review commission.

The draft bill is titled “Replace Common Core To Meet NC’s Needs”. The draft number is TLza-24.  Update: Here is the link to the report and draft bill.

Chairman Holloway stated this bill is not intended to just rename Common Core but instead, replace it. The draft bill also leaves the national testing consortiums tied to the Common Core (PARCC, SBAC) in favor of a new assessment instrument to assess student achievement. In addition, the draft bill states, “The State Board shall not acquire or implement such an assessment instrument without the enactment of legislation by the General Assembly authorizing the purchase.”

This is wonderful news. The invasion of privacy included in Common Core, along with the age-inappropriate material and the convoluted approach to mathematics is not a good thing.

Thank you, legislators in North Carolina for listening to the people who elected you.