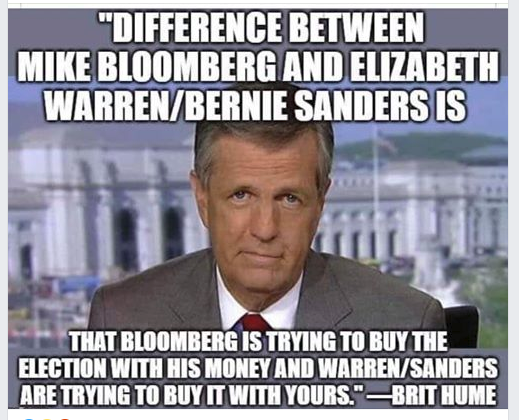 I have watched Fox News since it arrived on my cable system many years ago. I appreciated Brit Hume, Tony Snow, and watch Bret Baier. The discussion panels up until the past year have been informative and smart. There was also a reasonable balance of liberal and conservative points of view. Starting somewhere last year, there was a change. I am not a Trump supporter, but even I winced at some of the things said about Donald Trump during the week and on the weekend shows. The clips I heard from the other networks were no better. Well, today NewsBusters confirmed my suspicions.

An article posted at NewsBusters today contained the following graph: 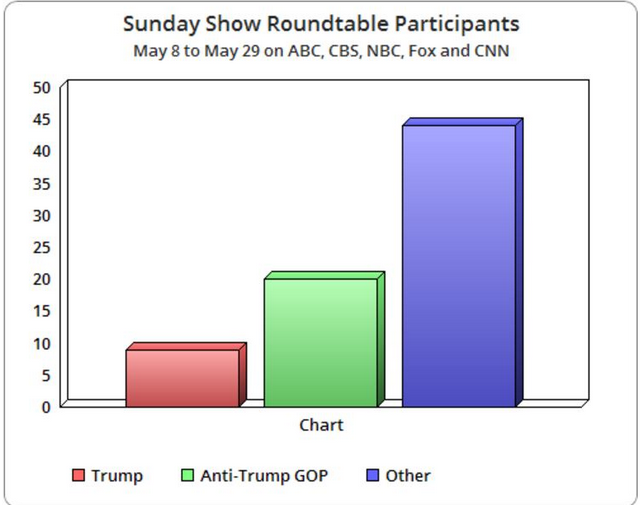 The difference between liberals and conservatives is still significant when you include anti-Trump GOP guests. While Fox and CNN had equal numbers of Republican and Democratic guests, ABC, CBS and NBC had nearly three times the number of liberal guests (36) compared to either pro or anti-Trump Republicans (13).

The purpose of having four participants is to encourage a wide variety of views in the discussion. By stacking these discussions with liberal journalists in addition to outright Hillary and Sanders surrogates, the networks are steering the narrative in a particular direction.

ABC’s This Week with George Stephanopoulos, CBS’s Face the Nation each only had one Trump supporter during that entire time period, meaning that they each had three out of four roundtable discussions with no representative of the presumptive GOP nominee. NBC’s Meet the Press only had two during that time period. This lack of Trump supporters remained unchanged during the Sunday shows on May 29, after Trump had clinched the 1,237 delegates needed to earn the GOP nomination.

In contrast, CNN’s State of the Union hosted by Jake Tapper featured a Clinton Supporter, Sanders supporter, anti-Trump GOP guest and a Trump supporter consistently on all three of his shows which included panels (his show on May 29 consisted of an hour-long interview with Florida Senator Marco Rubio).

Each Sunday show broadcast had a roundtable discussion with four pundits or journalists, adding up to a total of 73 roundtable participants over a four week period between the five shows. The only exceptions were ABC’s This Week with George Stephanopoulos on May 8 which had five guests, CBS’s Face the Nation on May 8 which had eight guests, and CNN’s State of the Union on May 29 which did not have a roundtable discussion.

So where do you go to become an informed voter? If you have an internet connection, you can go to alternative news sources. NewsBusters is a very good example of one. But that is not really the point. The media should not be cheerleaders–they should report the news as it is. If they have a bias, they should be open about it from the beginning. People who listen to Rush Limbaugh, Sean Hannity, and Mark Levin understand that they are hearing the conservative point of view–first because they represent an informed audience, and second because the point of view of the show’s host is stated. I would love to see that sort of honesty from the mainstream media. The American voter is not informed, particularly the younger generation. They are not taught history in school, and they learn about current events through unreliable sources.

Thomas Jefferson understood the value of education. He stated, “If a nation expects to be ignorant and free, in a state of civilization, it expects what never was and never will be.” Neither our schools nor our press is keeping the voting public informed. Unless that changes, the America we all love will be no more.

Kirsten Powers posted an article at the Daily Beast today entitled, “How Hope and Change Gave Way To Spying on the Press.” She does a very good job of explaining how we got from hope and change to threatening James Rosen with criminal prosecution for investigative reporting. Brit Hume pointed out on Special Report last night that in the past when the government pursued a leak, they prosecuted the leaker–not the reporter. It is very unusual to threaten to prosecute the reporter. I also should mention that the government’s invasion of Mr. Rosen’s privacy during this investigation is stunning.

So how did we get here?

It was 2009, and the new administration decided it was appropriate to use the prestige of the White House to viciously attack a news organization  – Fox News – and the journalists who work there. Remember, they had barely been in office and had enjoyed the most laudatory press of any new president in modern history. Yet, even one outlet that allowed dissent or criticism of President Obama was one too many. This should have been a red flag to everyone, regardless of what they thought of Fox News. The math was simple: if they would abuse their power to try and intimidate one media outlet, what made anyone think they weren’t next?

The article relates the various comments by administration spokesmen that Fox News was not a valid news outlet. It also points out that only one journalist questioned what was going on:

Yet only one mainstream media reporter – Jake Tapper, then of ABC News – ever raised a serious objection to the White House’s egregious and chilling behavior. Tapper asked future MSNBC commentator and then White House Press Secretary Robert Gibbs: “[W]hy is [it] appropriate for the White House to say” that “thousands of individuals who work for a media organization, do not work for a ‘news organization’?” The spokesman for the president of the United States was unrepentant, saying: “That’s our opinion.”

Obviously, they are entitled to their opinion. What they are not entitled to is to use the power of the government against a news organization that does not agree with everything they are doing.

The article goes on to cite the latest example of the White House targeting those news reporters that do not agree with their politics. Media Matters, a Democratic advocacy group, has launched a smear campaign against Jonathan Karl after his recent reporting on Benghazi. A group called Fairness and Accuracy in Reporting (FAIR) has referred to Jonathan Karl as “a right wing mole at ABC News.” If you don’t tow the line, you must be a right wing mole. Right.

What all of us in the media need to remember – whatever our politics – is that we need to hold government actions to the same standard, whether they’re aimed at friends or foes. If not, there’s no one but ourselves to blame when the administration takes aim at us.