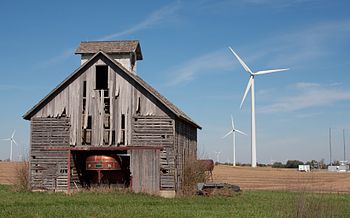 Last night I had the privilege of hearing John Droz, Jr., speak on the topic of alternative energy. Mr. Droz is part of the Alliance for Wise Energy Decisions (AWED). an informal group of PhD‘s and other individuals involved in energy and environmental matters. As a physicist, Mr. Droz approaches the concept of green energy from a scientific perspective. Unfortunately, because the issue of green energy has become politicized, that approach is not generally heard. The group maintains the website WiseEnergy.org.

The issue last night was windmills–are they truly green energy and do they make sense scientifically? Recently Carteret County prevented the construction of a wind farm in their county, and there is now a company that may want to place a wind farm in Craven County. The discussion was a scientific approach to wind energy.

Mr. Droz explained that because a constant wind could not be depended upon, wind power alone cannot deliver electricity around the clock unless it is backed up by a conventional electrical source–coal, gas, wood, etc. So when you are talking about wind power, you are automatically talking about wind and.. That is something I have not often heard mentioned by the advocates of wind power.

There is also the issue of the impact of large wind turbines on residents nearby. In February of 2013, I posted an article (rightwinggranny.com) about wind power in Falmouth, Massachusetts. Falmouth is a town on the western end of Cape Cod, and theoretically would be a wonderful place to harness wind power–there is almost always wind. However, after the windmills began turning, residents complained of headaches, interrupted sleep, vertigo, and other symptoms. The Board of Selectmen voted to remove the turbines, but the town voted not to remove them (the removal might cost as much as $18 million). The town was examining other solutions–buying more property around the windmills (not cheap–property in Falmouth is expensive and there would also be the loss of real estate taxes paid to the town) and curtailing the hours the windmills operate. Obviously, neither solution is perfect.

The bottom line here is simple–from a scientific perspective wind power is not practical. There may come a time in the future when the technology advances to the point where wind energy does not need a fossil fuel back-up and the impact on people living near the turbines can be minimized, but we are not there yet.

The most important thing I learned last night was that if Craven County wants to protect itself from the damage wind mills would do to the county, there are some very basic things that can be done. First of all, the public needs to become aware of the facts about wind energy. Second of all, Craven County residents need to make sure that the Board of Commissioners is aware of the facts about wind energy. At that point, it is a matter of drafting basic legislation that will protect the country from the environmental damage that a wind farm would do to the community.

This is the link to the slideshow used in the presentation last night.