The article lists the rules broken:

Rule 3.8 of the American Bar Association’s rules of professional responsibility for prosecutors provides,

A prosecutor shall, except for statements that are necessary to inform the public of the nature and extent of the prosecutor’s action and that serve a legitimate law enforcement purpose, refrain from making extrajudicial comments that have a substantial likelihood of heightening public condemnation of the accused and exercise reasonable care to prevent investigators, law enforcement personnel, employees or other persons assisting or associated with the prosecutor in a criminal case from making an extrajudicial statement that the prosecutor would be prohibited from making under Rule 3.6 or this Rule.

A prosecutor shall not subpoena a lawyer in a grand jury or other criminal proceeding to present evidence about a past or present client unless the prosecutor reasonably believes:

(1) the information sought is not protected from disclosure by any applicable privilege;

(2) the evidence sought is essential to the successful completion of an ongoing investigation or prosecution; and

(3) there is no other feasible alternative to obtain the information;

3. Prosecuting Despite Knowing They Can’t Prove Their Case

Rule 3.8 also provides “The prosecutor in a criminal case shall: refrain from prosecuting a charge that the prosecutor knows is not supported by probable cause.”

Notwithstanding that the key collusion allegation had already been disproven before Mueller first turned on the lights in the special counsel’s office, for nearly two years Mueller has been trying President Trump in the court of public opinion. This is more than a mere expression. The venue for trying the president is in the Senate under Article I, Section 3 of the Constitution, and the constitutional framers always intended that senators make their decisions based in part on the opinions of the electorate they represent.

4. Special Counsels Aren’t Supposed to Be a Partisan Hit Squad

Mueller should not have been selected as the special counsel, due to his close personal relationship with Comey. Further, his entire staff was clearly not impartial.

As one example, the prominent attorney Jeannie Rhee worked for the Clintons to keep Hillary’s emails out of public view only months before joining the Mueller team to investigate Hillary’s political opponent. Clinton might face legal consequences for secretly starting the Russia collusion hoax using campaign funds.

5. Rosenstein Used His Government Position to Protect Himself

The get-Trump crowd has been carrying the scorpion of the Mueller investigation on their backs for nearly two years. The damage this has done to America may never be undone. The zealots claiming Trump to be a threat to the rule of law have proven themselves right by using their outrage to trample important constitutional principles such as the presumption of innocence, the right to defend oneself from criminal accusations, attorney-client privilege, and the right to be free from unreasonable searches.

None of that seemed important if we truly had a Russian agent occupying the White House. But we don’t. The anti-Trump zealots, not Trump, threatened these cherished principles that ensure equal treatment under the law for all Americans, even the president, regardless of political party.

The people responsible for the abuse of the role of the Special Counsel need to be held accountable. Otherwise, anytime someone the deep state disapproves of is elected, we will go through this entire scenario again. Rules were broken, attorney-client privilege was totally disregarded, and innocent people had their lives ruined simply because they tangentially worked with President Trump. That is unacceptable. The price paid by those who engineered and carried out this travesty needs to be so high that no one will ever attempt it again. This truly was an attempted coup. Those responsible need to pay the appropriate price.

Yesterday I posted an article about the sentencing of General Michael Flynn. In the article I noted that there were some curious circumstances surrounding the interview in which General Flynn is accused of lying. Evidently I am not the only person concerned about those circumstances.

The American Thinker posted an article today about the judge who will be sentencing General Flynn.

Judge Emmet G. Sullivan, who is due to sentence General Michael Flynn next Tuesday, has thrown a wild card on the table, raising the possibility that a miscarriage of justice may finally be called out and the guilty plea coerced by Team Mueller thrown out.

Thanks to the sentencing memorandum filed by counsel for General Michael Flynn, we now see that the FBI used deception to ensnare him in a perjury trap.

Of Special Counsel Robert Mueller’s many targets, the most tragic may be former National Security Adviser Michael Flynn. The former three-star general pleaded guilty last year to a single count of lying to the FBI about conversations he had with Russia’s ambassador to the U.S. Now we learn from Mr. Flynn’s court filing to the sentencing judge that senior bureau officials acted in a way to set him up for the fall.

Not a rich man after decades in uniform, Mr. Flynn pleaded guilty to avoid bankruptcy and spare his son from becoming a legal target. Mr. Flynn’s filing doesn’t take issue with the description of his offense. But the “additional facts” the Flynn defense team flags for the court raise doubts about FBI conduct.

The Flynn filing describes government documents concerning the Jan. 24, 2017 meeting with two FBI agents when Mr. Flynn supposedly lied. It turns out the meeting was set up by then Deputy FBI Director Andrew McCabe, who personally called Mr. Flynn that day on other business—to discuss an FBI training session. By Mr. McCabe’s account, on that call he told Mr. Flynn he “felt that we needed to have two of our agents sit down” with him to talk about his Russia communications.

There is another clue in The American Thinker article as to why the Judge is asking questions:

District Court Judge Emmet G. Sullivan on Wednesday ordered Flynn’s lawyers to hand over two documents: a memo that then-FBI Deputy Director Andrew McCabe wrote after speaking with Flynn ahead his Jan. 24, 2017 interview with two FBI agents and the FBI summary of notes taken during that same interview.

That summary, known as an FD-302, was compiled on Aug. 22, 2017 by the two FBI agents who interviewed Flynn. It is unclear why the summary was put together seven months after the Flynn interview.

When you look at the actions of the FBI and Special Prosecutor Robert Mueller’s team, you find that in some cases civil rights were trampled (attorney-client privilege, having a lawyer present, being put in solitary confinement for crimes that did not warrant it, etc.). Hopefully the actions of Judge Sullivan will cause both the FBI Special Prosecutor Mueller to be more aware of the civil rights of all Americans. 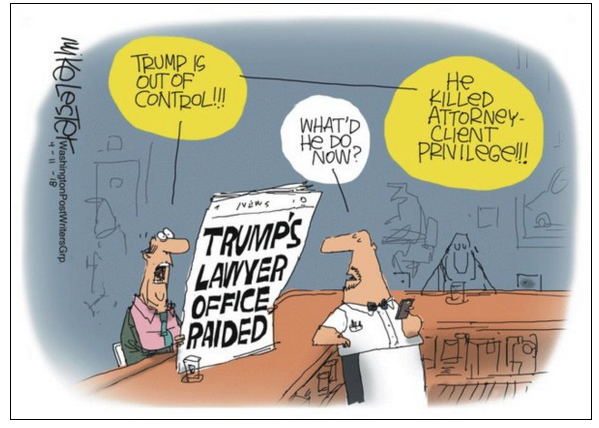 I guess it’s all a matter of perspective!