International relations are not always stable, and sometimes friendships and joint efforts can be difficult when circumstances change. The U.K Daily Mail posted an article today about what could become a very serious side effect of the current war in Ukraine.

The headline of the article reports:

Head of Russia’s space program posts sinister video threatening to LEAVE BEHIND US astronaut, 55, aboard International Space Station and only fly home his cosmonauts on March 30 because of Biden’s sanctions over Ukraine invasion

Russia’s space program has apparently threatened to leave an American astronaut aboard the International Space Station as it comes crashing down to Earth in a video shared by Russian state media outlet RIA Novosti.

Mark Vande Hei, a married 55-year-old father of two from Texas, is scheduled to return to Kazakhstan from the International Space Station (ISS) with two Russian cosmonauts aboard a Russian Soyuz spacecraft on March 30 after spending nearly a year on board.

But amid United States’ sanctions against Russia for the human rights violations it is committing in its siege of Ukraine, Dmitry Rogozin, head of the Russian space agency Roscosmos, has threatened to leave him in space.

Then, after trading barbs with retired astronaut Scott Kelly over a separate video in which workers covered depictions of American and Japanese flags, Rogozin wrote in a now-deleted tweet: ‘Get off, you moron! Otherwise the death of the ISS will be on your conscience!’

But Kelly said the video leaving Vande Hei on the International Space Station went too far.

‘It kind of enraged me that the country that we had been in this international partnership for 20 years would take the time to make a video to threaten to leave behind one of the crew members they are responsible for,’ he told the Wall Street Journal.

‘They agreed to be responsible for his safety, getting him to the space station and getting him home,’ Kelly explained. ‘For me, that kind of just crossed the line.’

Still, Rogozin has doubled down on his threats, claiming over the weekend that ‘illegal’ sanctions could cause the 500-ton ISS to crash down over Western countries.

He said: ‘The populations of other countries, especially those led by the “dogs of war,”  should think about the price of the sanctions against Roscosmos.’

Elon Musk has now offered to send his SpaceX rocket to rescue the US astronaut if the Russians abandon him, but NASA officials say they are confident Vande Hei will return as planned.

‘NASA continues working with Roscomos and our other international partners in Canada, Europe and Japan to maintain safe and continuous International Space Station operations.

‘On March 30, a Soyuz spacecraft will return as scheduled carrying NASA astronaut Mark Vande Hei and cosmonauts Pyotr Dubrov and Anton Shkaplerov back to Earth,’ it vowed.

‘Upon their return, Vande Hei will hold the American record for the longest single human spaceflight mission of 355 days.’

Hopefully, actions by Elon Musk will not be necessary, but this illustrates the folly of giving up the American space program and also illustrates the value of the free market and free enterprise. 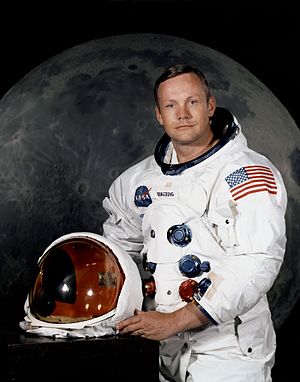 A graduate of Purdue with a degree in aeronautical engineering, his academic career was interrupted when he was called to duty with the U.S. Navy in 1949 and flew 78 combat missions in Korea. He was an exceptional man and an exceptional American.

The article cites Mr. Armstrong’s objections to the direction the Obama Administration has taken the American space program:

…Armstrong had publicly opposed the gutting of the U.S. space program by the Obama administration, which has left us no current way of sending men into space except for paying the Russians for a ride while NASA conducts “missions” like a Muslim outreach program and observing earth for signs of climate change.

Neil Armstrong was one of our early astronauts. The early astronauts were American heroes. All of them showed amazing courage in facing a task with so many unknown elements and no promise that they would return.

I have posted the above picture of Neil Armstrong because President Obama chose to honor Neil Armstrong by posting a picture of himself looking up at the moon. That picture is posted at Lucianne.com with the caption, “The Ego Has Landed.”