Surging shale production is poised to push U.S. oil output to more than 10 million barrels per day – toppling a record set in 1970 and crossing a threshold few could have imagined even a decade ago.

So what does this mean?

The economic and political impacts of soaring U.S. output are breathtaking, cutting the nation’s oil imports by a fifth over a decade, providing high-paying jobs in rural communities and lowering consumer prices for domestic gasoline by 37 percent from a 2008 peak.

…“It has had incredibly positive impacts for the U.S. economy, for the workforce and even our reduced carbon footprint” as shale natural gas has displaced coal at power plants, said John England, head of consultancy Deloitte’s U.S. energy and resources practice.

The article notes that in an attempt to stop American energy development, OPEC (Organization of the Petroleum Exporting Countries) tried to discourage shale production of oil in America by flooding the market with oil (Saudi Arabia also played a role in financing movies and advertising containing misinformation about fracking).

The cartel of oil-producing nations backed down in November 2016 and enacted production cuts amid pressure from their own members over low prices – which had plunged to below $27 earlier that year from more than $100 a barrel in 2014.

Shale producers won the price war through aggressive cost-cutting and rapid advances in drilling technology. Oil now trades above $64 a barrel, enough for many U.S. producers to finance both expanded drilling and dividends for shareholders.

Efficiencies spurred by the battle with OPEC – including faster drilling, better well designs and more fracking – helped U.S. firms produce enough oil to successfully lobby for the repeal of a ban on oil exports. In late 2015, Congress overturned the prohibition it had imposed following OPEC’s 1973 embargo.

The United States now exports up to 1.7 million barrels per day of crude, and this year will have the capacity to export 3.8 billion cubic feet per day of natural gas. Terminals conceived for importing liquefied natural gas have now been overhauled to allow exports.

That export demand, along with surging production in remote locations such as West Texas and North Dakota, has led to a boom in U.S. pipeline construction. Firms including Kinder Morgan and Enterprise Products Partners added 26,000 miles of liquids pipelines in the five years between 2012 and 2016, according to the Pipeline and Hazardous Materials Safety Administration. Several more multi-billion-dollar pipeline projects are on the drawing board.

Energy independence is important for America. Total energy independence will have a very positive impact on our foreign policy. Because tyrannical regimes in the Middle East have traditionally controlled the oil supply to the rest of the world, western countries have been required to support governments they should not be supporting in order to keep the oil flooding. Russia is another country that has used its pipelines to Europe as a way to control certain European countries. Energy independence will give America a degree of freedom we have not had for a long time. Hopefully we will use that freedom wisely.

The Daily Caller is reporting today that the United States Court of Appeals for the District of Columbia has ruled that the Environmental Protection Agency cannot force refiners to use cellulosic biofuels, which aren’t commercially available.

The court sided with the country’s chief oil and gas lobby, the American Petroleum Institute, in striking down the 2012 EPA mandate that would have forced refineries to purchase more than $8 million in credits for 8.65 million of gallons of the cellulosic biofuel. However, none of the biofuel is commercially available.

The decision applies to the cellulosic biofuel which is currently not commercially available–it does not apply to  EPA regulations regarding other renewable fuels, like ethanol and biodiesel.

Below is a chart from the American Petroleum Institute showing gasoline taxes acoss the country. 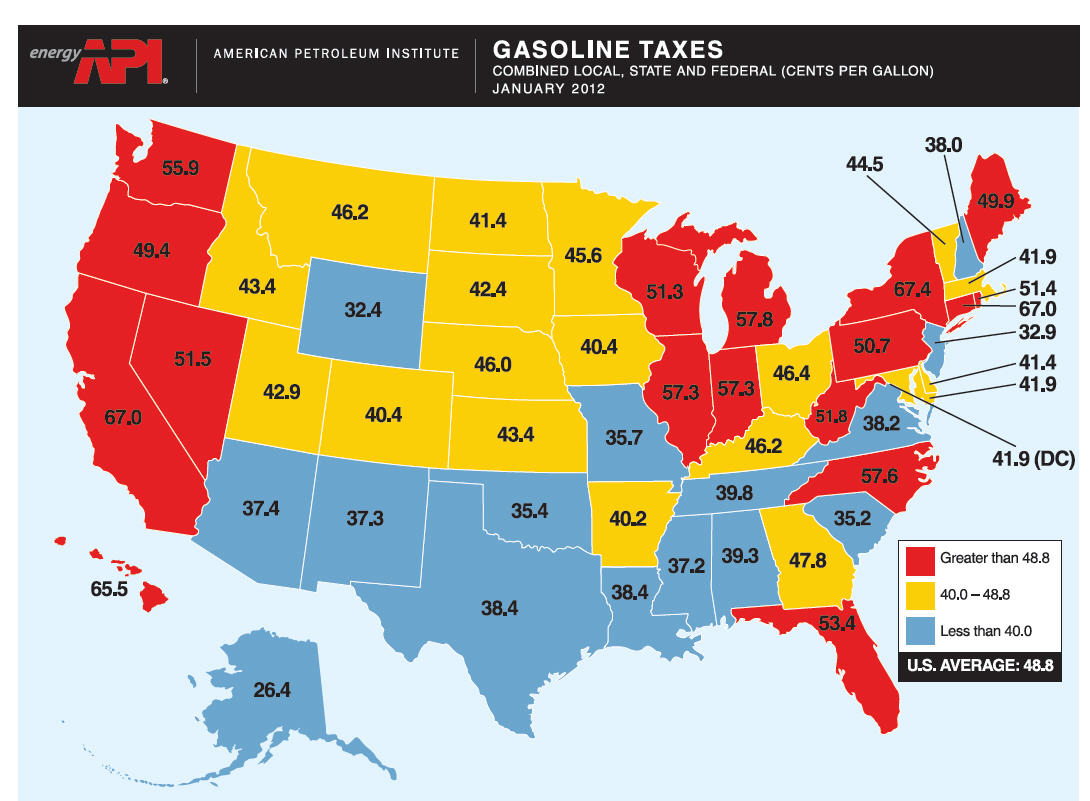 One of the highlights of the President’s State of the Union speech was his stating a plan to open 38 million acres for oil exploration in the Gulf of Mexico and a contest for natural gas technology.

Erik Milito, upstream director for the American Petroleum Institute (API), was not particularly impressed by the plan.

An article posted today at UPI.com:

Milito noted the lease sale outlined by the Obama administration was originally included in a program that became effective in 2007. Obama’s critics said the White House was in essence trying to generate political capital based on decisions made by the previous administration.

This is another reason voters have to pay close attention to anything said by any politician running for office this year. There will be a lot of misinformation floating out over the airwaves and in print in your local and national newspapers. It’s up to us to be our own fact-checkers!