How did the illegal immigrants promptly moved off of Martha’s Vineyard know who to call to sue Governor DeSantis? How did they even come to the conclusion that they could sue? Well, Breitbart News did some investigating and seems to have discovered the answers to those questions.

A handful of illegal aliens flown to Martha’s Vineyard have since filed a class action lawsuit against DeSantis, alleging their Fourth and Fourteenth Amendment rights were violated. The illegal aliens are being represented by lawyers at Alianza Americas — an NGO that has received nearly $1.4 million from Soros’s Open Society Foundation from 2016 to 2020.

Most of the Soros funding to Alianza Americas has gone to promote an open border agenda between the United States, Mexico, and Central America, including lobbying for pro-mass immigration policies in the U.S. 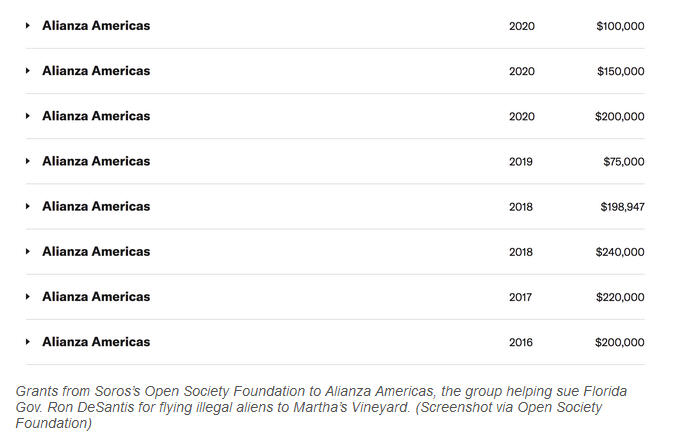 Despite the backlash from elected Democrats and the open borders lobby, DeSantis has vowed to fly more illegal aliens to sanctuary jurisdictions and the doorsteps of the Democrat Party’s wealthiest and most well-connected donors.

That may be the only way to get the Democrats and some Republicans to close the border. Please understand–if enough members of either party actually wanted the border closed, it would be closed by now. The Democrats want future voters and the Republican corporate types want cheap labor. Meanwhile American citizens and American workers are thrown under the bus.

On Tuesday, The Hill reported the following:

The group of Venezuelan migrants flown from Texas to Martha’s Vineyard, Mass., last week by Florida Gov. Ron DeSantis (R) filed a class-action suit against the governor and the state’s transportation secretary on Tuesday.

The suit provides a detailed account of how the migrants came to board the two planes allegedly under false pretenses, arguing the relocations violated their Fourth and 14th Amendment rights and the Civil Rights Act of 1964.

People who broke the law to get here and are here illegally have rights? Wow. Does America have the right to arrest them for breaking into our country?

The suit, filed in a federal trial court in Massachusetts, asks a judge to declare DeSantis’s relocations illegal under the Constitution as well as federal and state laws. It also asks the judge to prevent Florida from inducing immigrants to travel across state laws by fraud and misrepresentation.

Did Martha’s Vineyard have the right to move them to another part of Massachusetts?

Boston-based group Lawyers for Civil Rights said its attorneys, who have been on the island since last week, are representing the plaintiffs.

Are any of those lawyers offering to house any of the illegal immigrants?

The plaintiffs said the migrants boarded the flights with the belief they would land in Washington, D.C. or Boston, but they were told while in the air they would instead be arriving in Martha’s Vineyard.

They were also allegedly given a brochure that outlined support services in Massachusetts, but the programs referenced had “highly specific eligibility requirements” that the migrants did not meet, the suit said.

“Once the individual Plaintiffs and class members landed, it became clear that the promises made to induce them on the planes were in fact bold-faced lies,” it stated.

The migrants have since been relocated to a military base elsewhere in Massachusetts.

DeSantis has said the flights were “just the beginning” of relocation efforts.

I believe it is noteworthy that the migrants were removed from Martha’s Vineyard less than two days after they arrived. It is off season on the Vineyard, and it would have been very easy to put 50 people up in hotel rooms. However, that was not allowed to happen. I wonder if the year-round residents of the Vineyard will now take down their yard signs that say everyone is welcome here and hate has no place here. It’s very easy to welcome everyone when you are an island only accessible by plane or boat.