On Sunday, Hot Air reported that Attorney Jonathan Turley announced on Twitter that he has tested positive for Covid. 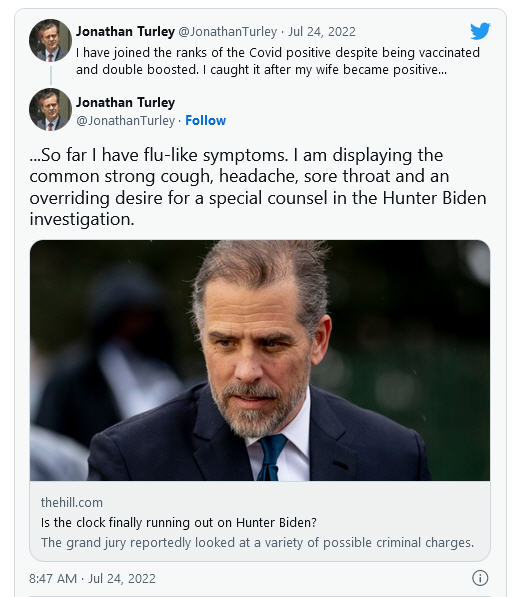 Makes sense to me.

Does anyone really think that Merrick Garland’s DOJ will indict Hunter Biden? The workings of grand juries are supposed to be secret but it is reported that the grand jury looked at the possibility of criminal charges for alleged influence-peddling with foreign contacts in China, Russia, Ukraine, and other countries. Hunter was very successful in cashing in on his father’s position in the government. We don’t know if the grand jury decided on any indictments. Turley points out that there is clear evidence of some crimes. “For example, Biden seems clearly to have lied on the federal form to acquire a gun by denying his drug use; he also appears to have violated the Foreign Agents Registration Act. And there are obvious tax charges that could be brought, even though he paid outstanding taxes after the investigation began.”

Perhaps he’ll be indicted over tax evasion or for lying on a federal form about that gun. Just don’t count on him being held accountable for his slimy dealings with foreign countries – unless the indictments are postponed.

Turley points out that since Joe Biden isn’t on a ballot in November and Hunter isn’t a candidate, just using the excuse of not wanting to interfere in the November midterms – and potentially dragging down Democrat candidates- is politicizing the grand jury investigation. Turley makes the case for a special counsel in the Hunter Biden case. Joe Biden (a.k.a. The Big Guy) is directly referenced in Hunter’s documents found on his laptop. The U.S. Attorney is unlikely to include any of that in a report. If Hunter pleads guilty of lesser charges to make a plea deal, he’ll be protected from future congressional hearings – such as are expected when Republicans take back majority control of the House. DOJ could cut a deal with Hunter and decline further charges. On the other hand, the U.S. Attorney could present evidence to a new grand jury, since this one has now expired, but it would take months to do and the midterm elections would be over.

It does not look as though Weiss called any witnesses who could testify about influence-peddling, including the president. Joe Biden would have to be called as a witness to answer any questions about The Big Guy’s involvement. We now know that Joe met with Hunter’s business partners, though he has consistently denied knowing anything about Hunter’s business dealings.

We’ll see what happens and if indictments do come down. Just don’t get your hopes up that Hunter will ever be held to the same standard that others are in these matters. He’ll likely write a check or two if his wrist is slapped and be on his merry way.

That is not equal justice under the law.