America’s economy is not exactly humming along. Inflation is out of control, and continuing high gas prices are adding fuel to the fire. It hasn’t been a good economic year for most Americans. However, the Biden administration is doing everything it can to avoid saying that America is experiencing a recession. On Sunday, Red State posted an article about one way that the Biden administration is avoiding admitting that we are in a recession.

This coming July 28th, the U.S. Bureau of Economic Analysis will release the second quarter GDP numbers, and all available signs point to a disastrous report. Current trackers have growth sitting at around -1.6 percent as of July 19th.

That means that according to the most traditional definition of a recession, the United States has already entered into one. US first quarter GDP came in at -1.6 percent, which combines with the second quarter drop to give the economy two straight quarters of negative growth. That is the technical definition of a recession. Further, the bond yield curve has recently inverted, something that has preceded every other recession in modern history.

What’s the White House to do with that devastating economic news dropping on their watch and as a result of their policies? Apparently, in a move that would make George Orwell cringe, they are going to simply redefine what it means to be in a recession. 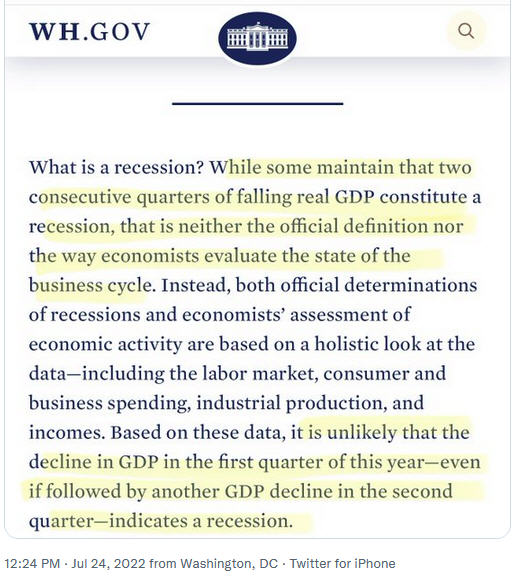 George Orwell would be proud.

I wonder if the “economists” cited by the White House in that statement are the same “economists” who said inflation would be temporary and transitory? That would make sense given how ridiculous it is to suggest that two straight quarters of negative growth combined with an inflationary boom and a yield curve inversion don’t qualify as a recession. After all, why be technical about something as important as analyzing the US economy when you can just have a panel of faceless economic advisors redefine the terms and proclaim that negative growth is actually a sign of strength.

Do they really think Americans are that stupid?