If you had any doubt that the mainstream media is doing everything it can to discredit President Trump, these two Twitter tweets should dispel that doubt: 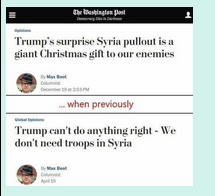 In all honesty, I have no idea whether or not it is a good idea to bring home troops from Syria. It does seem to me that we have been fighting in the Middle East since 2001 and have accomplished little. The definition of insanity is doing the same thing over and over again and expecting different results. That is a fairly accurate description of the wars we have been fighting in the Middle East. A new approach is needed. I am not sure what that new approach will be, but obviously the last approach is not working very well.