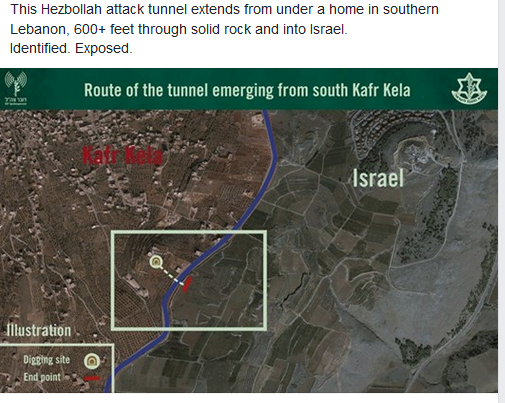 The Washington Post posted an article today about the Israeli effort to destroy these tunnels.

Israel on Tuesday began to destroy Hezbollah tunnels dug under its northern border, an operation launched with much fanfare at a time when embattled Prime Minister Benjamin Netanyahu faces a corruption investigation and accusations of being soft on security.

The military said it had exposed one of the Lebanese militant group’s tunnels that crossed into Israeli territory in what it dubbed “Operation Northern Shield.” A military spokesman, Lt. Col. Jonathan Conricus, said that “several” tunnels had been monitored for “quite a long period of time” and that the operation had been planned for a year and a half.

…Iran’s regional hegemony has also been a driving foreign policy concern of the Trump administration. U.S. national security adviser John Bolton said the United States “strongly supports” Israel’s efforts to stop tunneling into its territory. “More broadly, we call on Iran and all of its agents to stop their regional aggression and provocation, which pose an unacceptable threat to Israeli and regional security,” Bolton said.

Israel has been using what it says is new technology to detect and destroy tunnels built by Hamas in the south, under the fence with Gaza. However, the tunnel destroyed on Tuesday was the first on the northern border.

These tunnels are another reason why sanctions on Iran are a good idea. Hezbollah is funded by Iran.