Yesterday The Washington Examiner posted an article about some of Representative Nancy Pelosi’s plans should she become Speaker of the House. Say what you will about the lady, she wants to protect the Democrat party from themselves.

Democratic leader Rep. Nancy Pelosi, D-Calif., in the midst of fending off a coup to derail her return to the House speakership, is proposing a series of rules changes that could kneecap liberals from pursuing a bold agenda in the new Congress.

Among the many proposed rules changes the incoming majority plans to make in a draft document obtained by the Washington Post, is one backed by Pelosi and Rep. Richard Neal, D-Mass., ranking member of the House Ways and Means Committee, that would “[r]equire a three-fifths supermajority to raise individual income taxes on the lowest-earning 80% of taxpayers.”

The proposed changes also hint at restoring some sort of “reasonable rule” aimed at making sure legislation is paid for, though there isn’t much elaboration.

Below is a chart from Pew Research Center illustrating who pays taxes. The chart is from 2016: 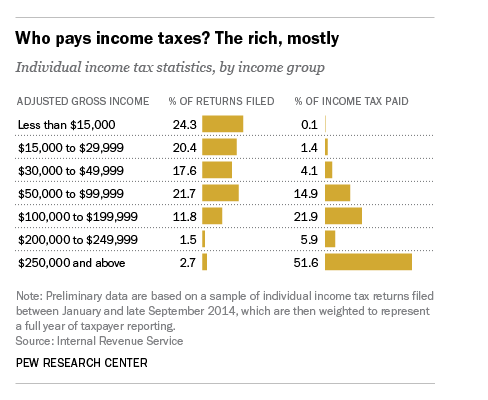 Raising taxes on the lowest 80 percent of taxpayers would theoretically even the tax burden, but it would be another blow against the Middle Class. Keep in mind that one of the signs of a country with a healthy economy is a thriving Middle Class. I would like to see all Americans pay some income tax–everyone needs ‘skin in the game’, but simply raising taxes on the lower 80 percent of Americans makes no sense–it will only slow down the economy and not raise revenue.

Now, I suppose Democrats technically would have some wiggle room if the new rule were adopted. Because the proposed rule specifies “income taxes” it leaves an opening to raise money in other ways — payroll taxes, VAT taxes, and so on. But politically, that’s really a nonstarter. If Democrats make the 80 percent pledge and end up raising taxes on the middle class, Republicans will be able to effectively campaign against it as a broken promise, and any Democratic candidate trying to claim, “Well, we said income tax, but not payroll tax,” will be scorched.

I mean, I didn’t expect Pelosi to suddenly go full speed ahead with the Sanders agenda, but I also wouldn’t have predicted that she would have cut liberals down right out of the gate.

Representative Pelosi is attempting to protect her party’s chances in the 2020 presidential election. As much as I don’t wish her success, her fellow party members would do well to pay attention to what she is doing–she is trying to protect the future of the party. Older Americans are the majority of the voting population, and generally speaking, they do not support socialism–they have seen too much.