On Monday, Issues & Insights posted an article about inflation and the state of the American economy.

“It’s a recession,” Truman had intoned, “when your neighbor loses his job. It’s a depression when you lose yours.”

To which The Gipper appended, entertainingly: “And recovery is when Jimmy Carter loses his.”

These articulations sprang to mind in pondering the variations of inflation measurements advanced by economists to determine whether price growth is “easing,” as the counterfeit chief executive would have one believe.

Should the focus be the “headline” Consumer Price Index? The one the Bureau of Labor Statistics describes as “a measure of the average change over time in the prices paid by urban consumers for a representative basket of consumer goods and services” (listed on the chart below)? Should the guide be a CPI subset referred to as “core inflation,” which excises “more volatile” food and energy prices? And how about the latest craze: “super core inflation?”

According to Fortune magazine, super core “does not have an established definition” but “refers to price measures that exclude sectors that economists feel distort the broader inflation figure.”  Economists like Paul Krugman (yeah, we know; kind of like discussing “military intelligence”) surmise that super core leaves out not just food and energy but also housing. 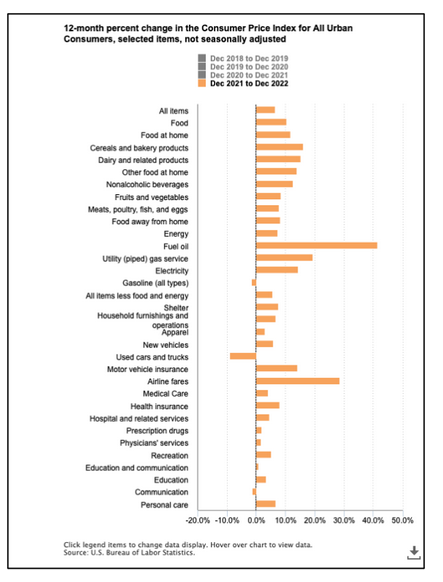 Yet both the spending and the inflationary outcome – a dragon that had been largely slain since the Reagan Administration – are now revived for one reason: provide another set of tools of power and oppression.

The spending is to get citizenry and businesses alike hooked on federal largess. Inflation is another means of weakening the populace and private institutions as their labor and investment yields less and, in yet another spiral, they get all the more dependent on Uncle Sam and its cohort of crony capitalists.

The cynical, midterms-oriented pause in the upward price of fuel, occasioned by further manipulation of energy markets in the form of petroleum reserve releases, is only a stall in this brutal power play.

No matter the Fed’s efforts to run twice as fast – and come up with new fictions when it comes to measuring the real price of the dollar – there is no way for the central bankers even to stay in the same place when Jerome Powell’s exertions are swept under by a continued flood of Inflation Reduction Act and Omnibus(t) largess and excess.

Meanwhile, this correspondent will continue to define inflation as what it is: the loss of his dwindling dollars’ buying power. And relief, again paraphrasing The Great Communicator, as the prospect of another loss of power: Joe Biden’s.

Hang unto your hats. Unless Congress develops a spine to stop the spending, the future looks a little shaky.