On Monday, The Daily Wire posted an article with the following headline, “Say What? Trudeau Claims Canadians Are ‘Disgusted’ Over Truck Convoy Protesters.” 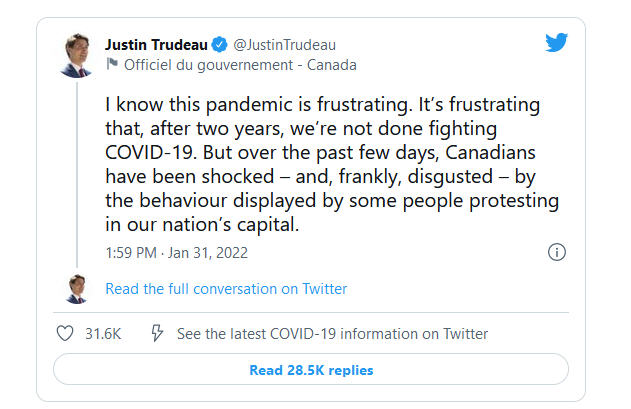 Actually, the reason people are protesting in the nation’s capital is that they are disgusted by the way the Canadian politicians are acting.

As The Daily Wire reported on Saturday, large crowds gathered in Ottawa to protest against the nation’s vaccine mandates, particularly against truckers in the nation:

Video of the massive Freedom Convoy 2022 rally in Ottawa, Ontario, Canada, illustrate how people showed up in massive numbers from daylight through night to protest against the Canadian government’s vaccine mandates. Those mandates would force unvaccinated Canadian truckers crossing into the United States to quarantine once they’ve returned home.

Freedom Convoy spokesman Benjamin Dichter told Fox News’ Tucker Carlson, “We’ve seen Canada go from a country of Justin Trudeau’s promises of ‘sunny ways’ into dark authoritarian oppression and control. We want two things: we want to get rid of the vaccine mandates and the passports. And the passports, that’s the really concerning one. Yesterday it was my first time ever crossing the border in my truck with my digital passport, and I held my phone up to the border agent to give him the QR code. You know what he said to me? ‘Oh, it’s okay, I don’t need it.’”

“So what do you mean, you don’t need it?” Richter recalled asking, adding that the agent replied, “Your phone already popped up on my screen and is correlated with your passport.”

“Think of that,” Richter said. “Can you believe that? So they know everybody who’s coming up to the border before they’re there and they’re tracking them. Maybe it’s outlandish, but what’s to prevent the government from introducing that across Canada and not limiting it to just borders?”

Don’t believe the spin. The world is watching and supporting the truckers. Please follow the link to read the entire article.