Yesterday in Washington was horrible. It was horrible because the Capitol was breached and people killed, but the other casualties of the day were honest, transparent elections and any hope of consistency from our media and elected officials.

Yesterday The Scoop posted an article about an event people may have forgotten.

When far-left radical communists protesting against the appointment of Justice Brett Kavanaugh to the US Supreme Court took over the Hart Senate Office Building atrium on Capitol Hill on October 4, 2018, leftists on Twitter PRAISED them. 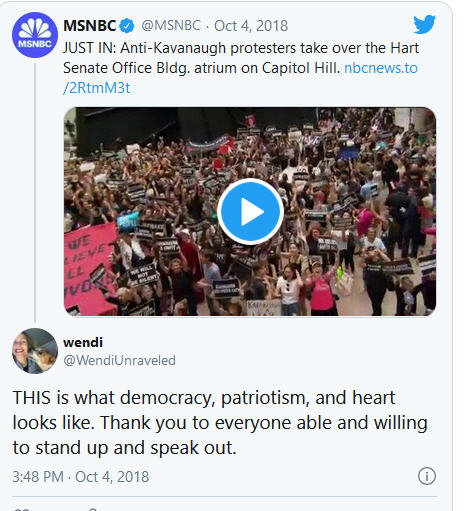 That was then, this is now.

Now let’s take another trip down memory lane to July 2, 2020. The Federalist reported the following:

Thursday afternoon, Democrats killed a resolution aimed at curbing mob violence. Sen. Mike Lee (R-Utah) introduced the bill after a man in Utah was mobbed then shot by a group of rioters. The non-binding resolution offered a statement of support for peaceful protesters and law enforcement who do their job well, while condemning violence and the desecration of monuments across the country.

“A non-binding resolution is the tiniest first step of a response,” Lee read as he introduced it. “We need to do much, much more… but in this divided political moment,… showing that Senate Republicans and Senate Democrats are able to speak with one voice against woke mob violence and in defense of equal justice and civic peace would be a welcome step.”

The resolutions itself states that the country was “founded on universal principles of freedom, justice, and human equality.” It also acknowledged that “throughout our nation’s history, Americans have struggled to realize those ideals … but nonetheless made greater progress toward them than any nation on earth.”

The resolution was immediately attacked. The article reports:

The intended bipartisan resolution swiftly ran into problems. Sen. Bob Menendez (D-N.J.) spoke directly after Lee to kill the bill. “The resolution reeks of supremacism. Reeks of supremacist views. And it seeks to mischaracterize overwhelmingly peaceful protests across the nation.”

Menendez then offered to support the resolution on one condition: if it condemned President Trump. He stated that if a sentence was added condemning “politicians who incite violence, especially President Trump,” the resolution would be acceptable. He then attacked the president for retweeting a video of two homeowners pointing firearms at a mob that stormed the gates to their private neighborhood.

What happened yesterday was tragic, but those in Congress and in the media need to look in the mirror before blaming others.