The problem with election fraud is that when it is left unchecked, it continues. I am not optimistic about overturning the fraudulent presidential election, but I am concerned about what that fraudulent victory will mean for the future of America. I strongly suspect that last night’s election in Georgia had some of the same problems that the presidential election had. 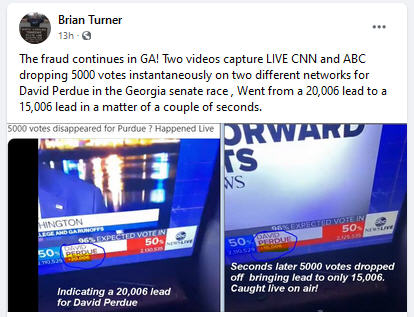 I can understand how a lead might shrink because votes from the other candidate came in, but I can’t understand how 5000 votes could suddenly disappear. I think this is a problem. I also think that if we don’t deal with the fraud now, we will never again have an honest election in America. We will be ruled by the elite political class who will eventually destroy the middle class and our way of life. We are already seeing the attitude among many of our politicians that the rules do not apply to them. I fear we will only see more of that in the future by those who are willing to cheat to win.