Today One America News posted an article about the information found on Hunter Biden’s laptop computer.

Director of National Intelligence John Ratcliffe has said Hunter Biden’s laptop is not part of a Russian disinformation campaign. In an interview Monday, he called out Democrat House Intelligence Committee Chairman Adam Schiff for claiming such.

The emails in question detail Hunter’s ties to corrupt Ukrainian oligarchs and Chinese officials who paid him for introducing them to his father when he was vice president.

Republican Sen. Ron Johnson (R-Wis.) fired off a letter to FBI Director Chris Wray, urging him to disclose if the agency is probing emails reportedly from Hunter’s laptop.

Johnson has asked Wray to inform the panel if the agency has taken any action regarding those emails. The lawmaker also questioned what the FBI knew about Hunter and when they knew it, while noting it speaks to a “larger issue.”

This comes as outrage surrounding the emails continues to grow. 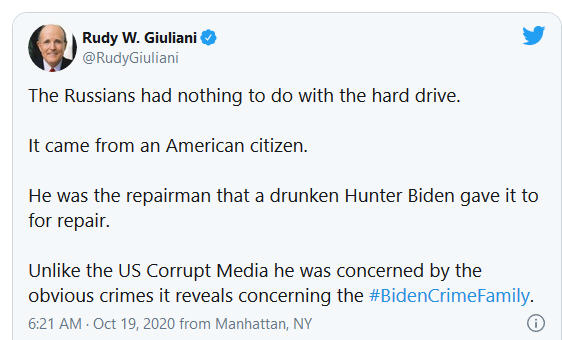 The media is trying to bury this story. Hopefully they will not succeed.