Portland has suddenly gone quiet. According to BizPacReview, Thursday evening marked “the first time in 93 days” that downtown Portland didn’t succumb to rioting. Somehow I doubt that was because the rioters were home watching President Trump speak.

Andy Ngo, who has been covering the riots for the past three months, tweeted early Friday morning, he speculated that the silence may be a result of reports that the FBI’s Portland branch has begun actively investigating the Black Lives Matter and Antifa extremists responsible for the rioting.

“Portland, Oregon’s FBI chief said Wednesday he is shifting the agency’s resources to focus more heavily on the nightly [extremist riots] in Oregon’s largest city that often end in vandalism, clashes with local police and dozens of arrests,” the Associated Press reported Wednesday.

“Special Agent in Charge Renn Cannon said he is pulling agents from fraud and organized crime teams to focus on ‘acts of violence and federal crimes’ committed during nearly three months of unrest.”

“We do investigate major threats of violence and federal crimes. And sometimes a major threat of violence is a cumulative threat that happens over a period of time. It starts to have a really negative impact on the community,” Cannon said to the AP.

“Here in Portland, we’re … making the assessment that we should be trying to do a little more than we have, because the cumulative effects and the nature of the problem indicate that the community needs help.”

The article includes a tweet from the FBI Portland showing pictures of rioters and asking for information.

There is, however, another aspect of this. The article includes the following tweet: 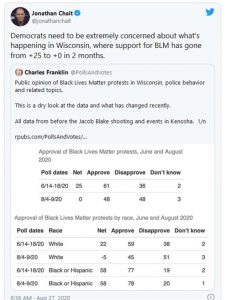 I realize the tweet is blurry. What it essentially says is that approval for Black Lives Matter is rapidly dropping (probably because of the riots). Keep in mind that the Democrat Party has managed to link themselves with Black Lives Matter by claiming the riots are simply valid protests. At one point a member of the mainstream media described a protest as a mostly peaceful but fiery protest as the fires burned behind him. I think most Americans want to feel safe in their homes, and the violence they are seeing undermines that feeling. The Democrats reluctance to condemn those perpetuating the violence is undermining the support for the Democrat party.