Yesterday John Hinderaker posted an article at Power Line Blog that included some good news about the coronavirus. Generally speaking it seems that a lot more people have had the virus without knowing it, and thus the death rate is much lower than originally thought. Americans are also in the early process of creating ‘herd immunity,’ which should prevent the overwhelming numbers of serious cases originally predicted. 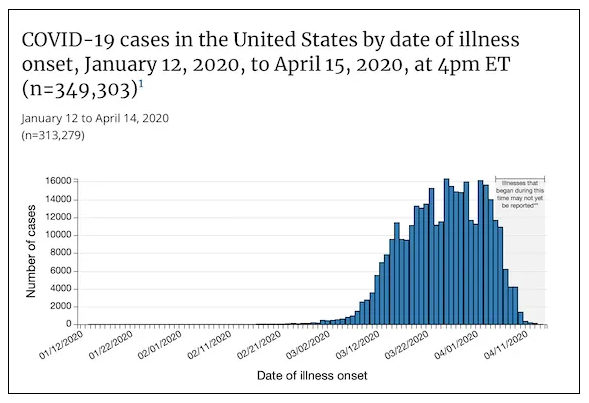 As you can see, we are on the downside of the bell curve. It should be noted that the number of deaths from the coronavirus is a lagging indicator and may increase in the coming two weeks before going down.

…there is growing evidence that many more Americans have had COVID-19 than has generally been thought. Reuters reports that of the sailors on board the COVID-stricken aircraft carrier Theodore Roosevelt, 60% of those who tested positive for the virus were asymptomatic. This is a higher percentage than was previously estimated by Dr. Fauci, 25%-50%. The Reuters reporter doesn’t seem to understand that this is good news, for two reasons.

First, it means that the fatality rate for COVID-19 is lower than most have believed. I think the balance of evidence so far is that the Wuhan virus is somewhat more lethal than the usual seasonal flu, but of the same order of magnitude. It is possible, however, that it may prove to be no worse, statistically, than the average flu.

Second, it means that the U.S. is closer to achieving herd immunity than previously believed. This ABC News story is to the same effect:

The first large-scale community test of 3,300 people in Santa Clara County found that 2.5 to 4.2% of those tested were positive for antibodies — a number suggesting a far higher past infection rate than the official count.

That’s the good news. The bad news is that we are still a long way from the levels that confer herd immunity.

Currently, global COVID deaths are just under 30% of the average for a seasonal flu bug, per the WHO. Those numbers are likely wrong, because China and Iran have almost certainly underreported their fatalities. If we assume that China’s true fatality number is ten times what it tells the WHO, and Iran’s is three times, then total global fatalities from COVID-19 would be 41% of an average flu season, so far.

For the U.S., according to CDC, the COVID-19 deaths to date equal 53% of the deaths from seasonal flu two yeas ago.

COVID-19 is a disease, and there nothing good to be said about diseases. But today’s news is generally positive.

One of the reasons I don’t trust the Chinese numbers of people who died from the coronavirus is an article in The Epoch Times on March 22, 2020, that reported the following:

The number of Chinese cellphone users dropped by 21 million in the past three months, Beijing authorities announced on March 19. Deaths due to the CCP virus may have contributed to the high number of account closings.

That’s an awful lot of people who suddenly decided they didn’t need their cell phones.