On Tuesday The Hill posted an article about the vote in the U.S. House of Representatives on the bill titled, “Opposing efforts to delegitimize the State of Israel and the Global Boycott, Divestment, and Sanctions Movement targeting Israel.” A similar bill was introduced in the Senate, but was referred to the Committee on Foreign Relations on March 25, 2019. No further action has been taken on the Senate bill.

The final vote was 398 yeas, 17 nays, 5 voting present, and 12 not voting. (The numbers are from the U.S. House of Representatives website.)

The article at The Hill notes:

House Democratic leaders brought the resolution to the floor under a fast-track process that required a two-thirds majority for passage and limited debate to 40 minutes. No one spoke in opposition to the resolution during the allotted debate, but the two progressives delivered floor speeches earlier in the day to express why they’d vote against it.

Tlaib, citing her family’s Palestinian roots, said she “can’t stand by and watch this attack on our freedom of speech and the right to boycott the racist policies of the government in the state of Israel.”

Someone should point out to Tlaib that Palestinians have full rights in Israel. They are more free and more prosperous than the Palestinians that live anywhere outside of Israel.

Lawmakers opposed to BDS stressed that the boycott movement against Israel is unlike other boycotts in American history, arguing that it espouses anti-Semitic views and undermines the prospects for peace in the long-running Palestinian conflict

“Here’s the thing about the global BDS movement: I don’t believe it promotes racial justice or social change at all. It promotes a one-sided view of the Israeli-Palestinian conflict that seeks to marginalize Israel, that would deny the Jewish people the right of national self-determination,” House Foreign Affairs Committee Chairman Eliot Engel (D-N.Y.) said during floor debate.

“You want to criticize a government, that’s your right. You want to stop buying products from a certain country, that’s also your right. But participating in an international commercial effort that undermines Israel’s legitimacy and scuttles the chances of a two-state solution isn’t the same as an individual exercising First Amendment rights,” Engel added.

Unfortunately, the Palestinians have illustrated the fact in recent years that they are not interested in becoming a positive member of the global community. In 2005 Israel removed its settlers from the Gaza Strip and turned the land over to the Arabs. Up until that point the Gaza Strip was the home of greenhouses that supplied fruit and vegetables around the world and had a flourishing economy. The first thing the Arabs did was destroy the greenhouses (and thus destroyed the basis for the thriving economy). Since that time the Gaza Strip has been used as a base for firing rockets and building terrorist tunnels into Israel. Money given to the Arabs that was earmarked for humanitarian purposes has been instead used to buy weapons and build tunnels. The Palestinians do not want to exist peacefully in a two-state solution–they want to destroy Israel.

The following is taken from an article I posted in January 2018: 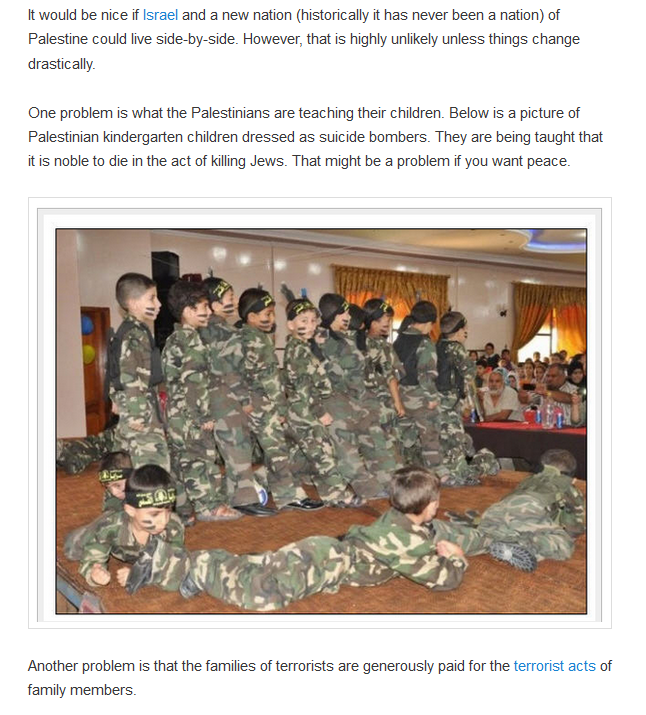 Until the Palestinians stop training their children to kill Jews, there will be no peace in the Middle East. The BDS Movement is simply another way to attack Israel. I am glad most of the House of Representatives understood that.