It seems a rather obvious point, but illegal immigrants entering America through our porous southern border have to go through Mexico to get to that border. That is the reason it makes sense to involve Mexico in the process of securing our southern border.

First of all, let’s look at the increase in the number of people attempting to cross our southern border. The chart below is from U.S. Customs and Border Protection: 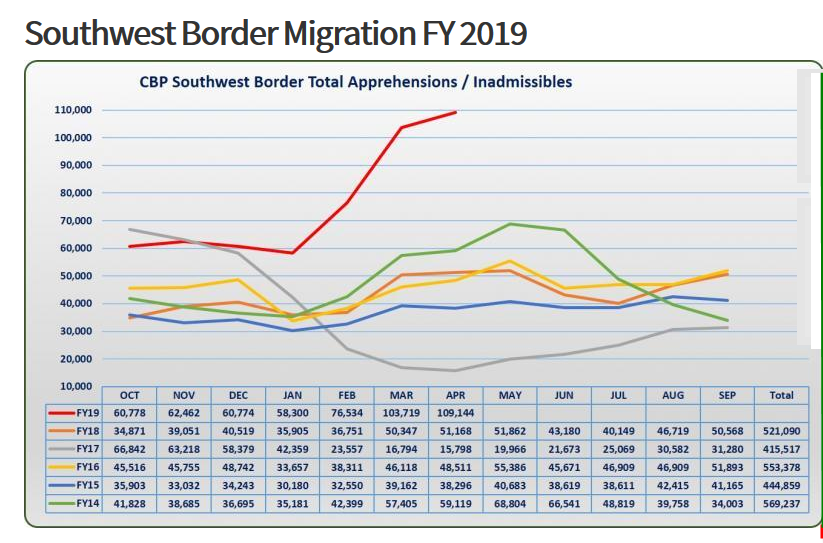 As you can see, the total apprehensions have increased dramatically in the past two years.

On June 1st, American Greatness posted an article with some suggested solutions to the problem. The article includes a list of how Mexico can become part of the solution rather than part of the problem.

On Thursday, the administration rolled out a new policy aimed at encouraging Mexico to do more to crack down on the thousands of Central American migrants passing through their country on the way to the United States to claim asylum.

The article notes the rules on aslyum:

This is where the “safe third country” doctrine comes in. Under international law known as the Dublin Regulation, migrants seeking asylum are required to claim it in the first safe country they enter. The theory behind this is that if migrants are truly seeking shelter from persecution, rather than simply trying to use the system to reach a specific destination, they will stop in the first place they find relief.

One interesting aspect of this is that the migrants would be more culturally compatible with Mexico than America. Mexico speaks Spanish, their native language. America speaks English (or some form of it).

At any rate, it is time for a solution. I hope the tariffs the Trump administration is threatening to impose provide an incentive for Mexico to help stop the flow of illegal drugs and immigrants at our southern border.