BizPacReview posted an article yesterday about a recent Rasmussen poll.

A new Rasmussen poll shows more voters believe it is Crooked Hillary Clinton rather than President Trump who is guilty of colluding with foreign operatives during the 2016 election campaign. Of likely voters polled, 47% believe the Clinton campaign was involved in collusion, as opposed to 45% who still buy the fraudulent Trump collusion story.

The worm is turning in spite of a non-stop, years-long onslaught of lies from the never-Trump media about it all. The tipping point is now … with the majority finally discerning the truth and slowly more and more rejecting the coordinated MSM disinformation campaign.

…The March 25-26 survey found 50% of voters satisfied with the conclusions reached by Mueller. About one-third, or 36%, are not satisfied and 13% are undecided.

The article also includes the following: 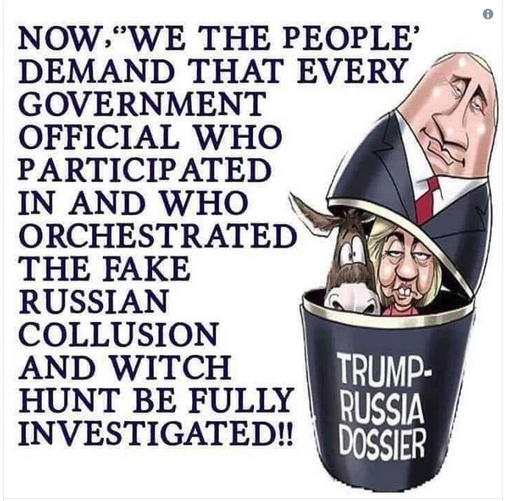 After 16 months of investigation, the cost had ballooned to $25 million, CNBC reported. Based on those figures, that works out to approximately $1.5 million spent per month. And that’s just working from September 2018, the 16-month mark. The cost has very likely gone up since then. If the $1.5 million figure remains static, taxpayers have paid another $7.5 million between October 2018 and February 2019.

In Mueller’s latest filing, released in September 2018, he reported “spending nearly $3 million on compensation, $580,000 on travel and transportation, $1 million on rent and related expenses, and $300,000 on contractual services, primarily related to IT,” according to CNBC.

The Democrats might want to keep all of these numbers in mind as they pursue their subpoenas of the Mueller Report. After the government spent some serious money and the mainstream media claimed that President Trump was a Russian agent, many Americans were not fooled.