First of all, The Gateway Pundit posted an article today that points out that the migrant caravan is not walking to America–they are arriving on flatbed trucks. 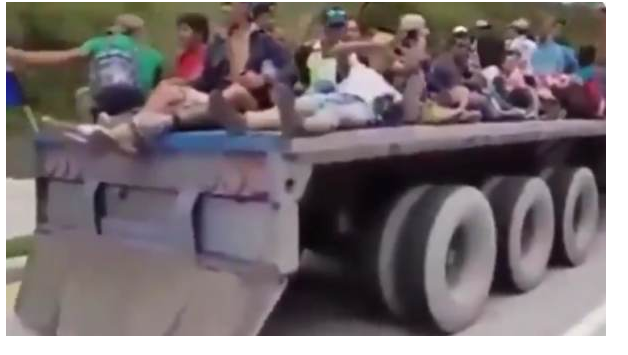 That actually makes sense. Who is paying for the trucks and the gasoline?

The migrants ‘walking’ through Mexico to reach the US appears to be more of a production than reality.

Yesterday The Daily Caller posted an article that I believes sums up the problem with the immigrant caravan headed this way.

The article at The Daily Caller reports:

Ramos, an outspoken immigration advocate, spoke with Carlson remotely on Tuesday from the caravan in southern Mexico. The Fox News host’s question came after the Univision host made several comments defending its members, including insisting unequivocally that none of them were from the Middle East.

“How many of these migrants are you taking in personally into your home and are supporting once they get into the United States?” Carlson asked.

“I think that’s a great question and that’s precisely the kind of question that people like you ask when you don’t want to understand that this has nothing to do with individuals,” responded Ramos. “It has to do with nations. And what we have to understand is that these refugees are not a threat to the United States. I know that in Fox News …”

“Before you attack Fox, this is a simple question,” Carlson interrupted. “How many are you taking in?”

After a back and forth that included Ramos stating that immigrants’ desire to come is “really a love letter to the United States,” the Fox News host pressed again: “I’m asking you a very simple question – How many of these migrants are you personally taking responsibility for? How many are going home to Jorge’s place in Miami at the end of the day? And please be specific.”

“I think that again this has nothing to do with individuals. I wish I could help all of them,” responded Ramos.

The problem is that we all want to help them, but we are not able to help all of them without overwhelming ourselves. Those who are saying we need to let in these thousands of people and feed and clothe them need to remember that we have homeless Americans (many of whom are veterans) that we need to help first. I am sorry that they have been misled to make the trip north by empty promises, but notice that the countries that they passed through on their way here have not provided them with asylum (as required by international law). The only way to stop the flow of illegal immigrants into America is to send them home.

In looking at the potention damage letting this caravan of people into the country could do, we need to remember the Cloward-Piven Strategy. The Cloward-Piven strategy is a political strategy outlined in 1966 by American sociologists and political activists Richard Cloward and Frances Fox Piven that called for overloading the U.S. public welfare system in order to precipitate a crisis that would lead to a replacement of the welfare system with a national system of “a guaranteed annual income and thus an end to poverty”. That is the promise of communism. We see how well that has worked in the past.