The Washington Examiner posted an article today about welfare payments that go to illegal immigrants. 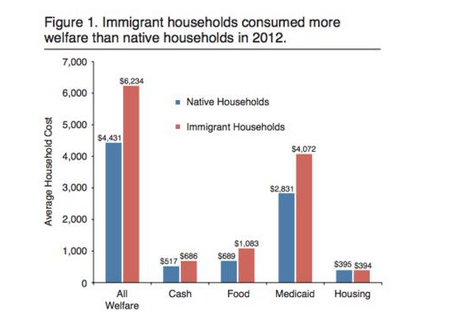 I don’t want anyone to go hungry or be homeless, but why are we taking money away from Americans who have worked for it and giving it to people who are here illegally? It is time to reevaluate how we are spending tax money.

The total cost is over $103 billion in welfare benefits to households headed by immigrants. A majority, 51 percent, of immigrant households receive some type of welfare compared to 30 percent of native households, said the analysis of Census data.

We need to take a serious look at our immigration policies. We also need to take a good look at efforts we are making to educate the people who are already here–legally or illegally. We can’t send everyone back home, but we can secure the border and make an effort to help those people here–legally and illegally, immigrant or natural citizen–get off of our welfare rolls. We can no longer afford to have an entire segment of our population depending on hard-working taxpayers for their support–it is time everyone finds a way to contribute to our economy–not just take from it.