The Washington Free Beacon posted an article today about a new labeling requirement enacted by the Obama Administration.

A memo issued earlier this month by the Obama administration directs the U.S. “trade community” and government partner agencies to explicitly label Israeli-made goods that have been produced in the West Bank.

The Jan. 23 directive states that it is “not acceptable” to label goods coming from Israeli companies in the West Bank and Gaza Strip as having been produced in “Israel.”

The area that President Obama refers to as the West Bank is part of Israel. In an article I posted in April of 2011, I explained:

“Both the New York Times and the Washington Post, in their April 22 editions, report that a group of prominent Israeli leftist intellectuals demonstrated in Tel Aviv in support of a Palestinian state based on the “1967 borders.””

…“Compounding this lie, the Times and the Post also erase from actual history the fact that during Jordan’s illegal 1949-67 occupation of the West Bank and East Jerusalem, including the entire Old City of Jerusalem, Jews were barred from Judaism’s holiest sites — the Western Wall, Temple Mount and Hebron’s Cave of the Patriarchs.   A return to the 1967 line would deal Jews a similar fate.

“The truth, so lacking in the Times and the Post, is that Israel still awaits an eastern “border” that can and will be fixed only as part of a final resolution of the Israeli-Palestinian conflict , as mandated by the UN Security Council in Resolution 242.  In the meantime, history and Arab aggression  have  swept away the 1949 armistice line and, notwithstanding the lie perpetuated by the Times’ Isabel Kershner and the Post’s Joel Greenberg, a “border” still remains an elusive quest that has yet to reach its  final destination.”

This is a map of the British Mandate for Israel: 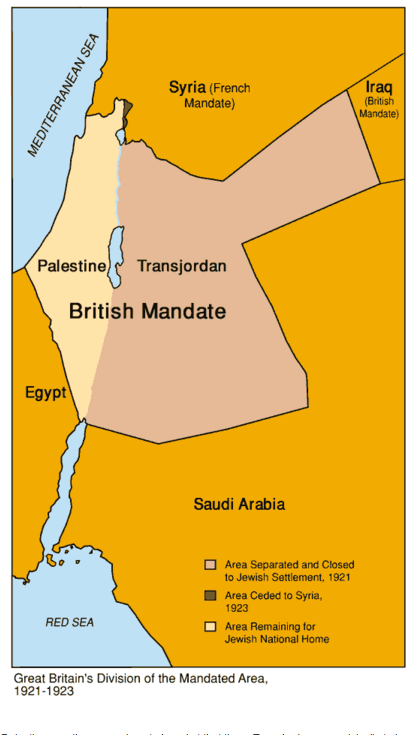 I need to explain that Palestine was the name the British gave to Israel. There never was a Palestinian state. I really think Israel has made enough land concessions. The land Israel has not brought peace, it has simply provided additional launching pads for Hamas to launch rockets at Israeli civilians. Labeling goods that are from Israel as not from Israel is a petty cheap shot that should be beneath the American government.