In a healthy economy, incomes will rise. If the economy is not growing, artificially forcing companies to raise wages only creates problems. Some recent events at WalMart reinforce this concept.

The Benton, Arkansas-based mega-retailer has tried hard to be a good corporate citizen but has been met with angry opposition every time it tries to open a store. More recently, it announced raises for 1.2 million employees next month to a $10 per hour minimum, with senior workers getting a hike to $15 an hour, from $13 currently. But these wage hikes were made for the worst possible reason: political pressure.

Not coincidentally, Wal-Mart recently announced it was closing 154 stores. Those are mostly stores that, operating on Wal-Mart’s razor-thin 3% profit margin, can no longer make money at higher wages. That’s precisely why Wal-Mart won’t build the two stores in D.C. it said it would. As a result, local minority youths will lose out on hundreds of decently-paying entry-level jobs.

During a healthy economy (or an economic recovery), family income increases.

This is a picture of what has happened to household income since 1985: 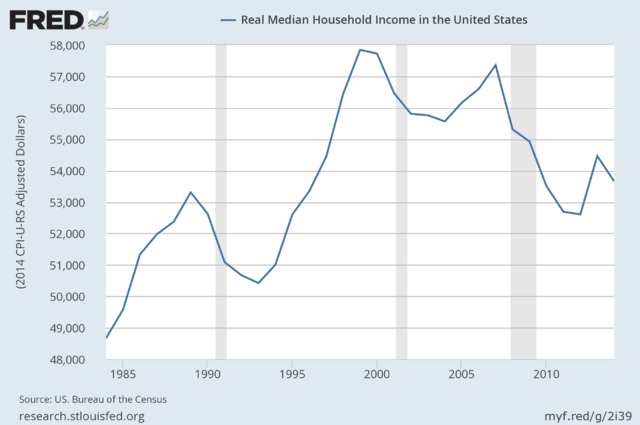 As you can see, when the economy is healthy household income rises, when the economy falters, incomes fall or remain the same. This is a basic economic concept. When the government interferes in this process, companies lose money and are forced to cut their loses.

In the five-year period between January 2010 and December 2014, DC restaurants were hiring an average of 187 new food workers every month,” wrote economist Mark J. Perry on his Carpe Diem blog at the American Enterprise Institute. “Last year though, restaurant hiring stalled out, likely due to rising labor costs, and the city’s food jobs fell by an average 21 every month in 2015 (through November).” By the way, job growth for restaurants remains healthy in surrounding areas just outside D.C.

This is what happens when you raise the minimum wage, even with the best of intentions. Perry estimates that just by raising the minimum wage to $10.50 in D.C, with another hike to $11.50 slated for July of this year, some 2,000 jobs already have been lost.

Sorry, but forcing employers of unskilled, largely untrained labor to pay higher prices for their labor is a recipe for automation, layoffs and no job creation. It punishes the poor, unskilled and uneducated most of all. The leftist demagogues who push this nonsense should be ashamed.