This is a chart from the Washington Free Beacon showing the financial impact of Obamacare even before it is completely put into effect: 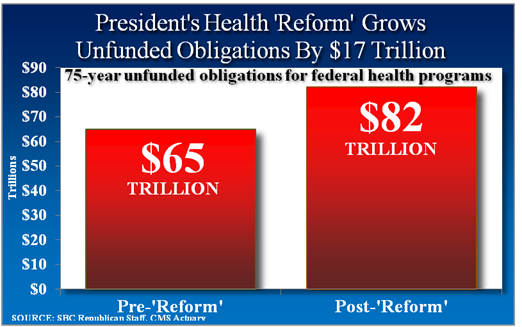 Staff at the Senate Budget Committee, which calculated the figure using methods based on those used by the Centers for Medicare and Medicaid Services (CMS), found that total unfunded obligations for federal health care programs have jumped from $65 trillion in 2009 to $82 trillion in 2011.

Added to the government’s existing obligation for entitlement programs like Social Security, Medicare, and Medicaid, the total now comes to almost $100 trillion.

It seems to me that it is becoming very obvious that Obamacare will not save Americans any money. There are much better ways to do healthcare reform–tort reform, portability, risk pools for people with pre-existing conditions. All of these can be done without federal control. It’s time to remind the government that they govern at the consent of the governed–we are citizens–not subjects.