Most of us remember this picture from the summer of 2020: 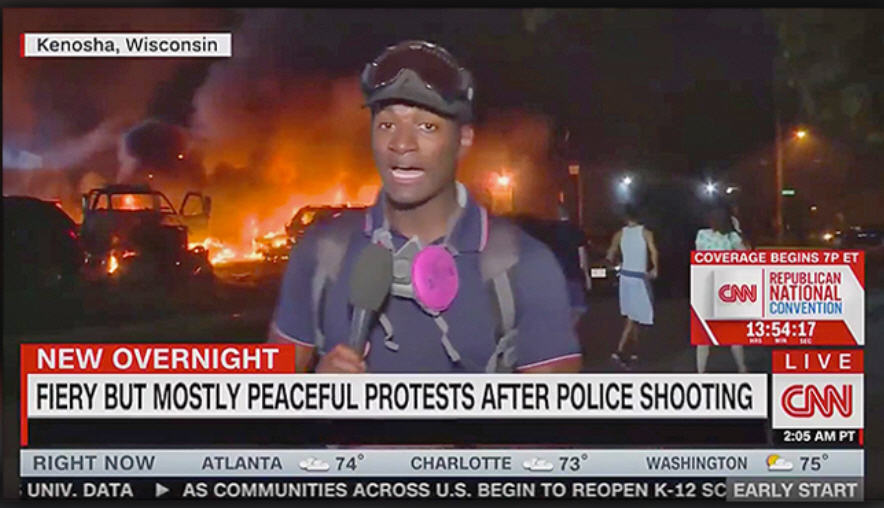 CNN’s intrepid reporter explained that the protests were ‘mostly peaceful’ as we watched the city burn down behind him.

On Friday, The Washington Free Beacon reported the following:

The CNN journalist best known for reporting from the burning scene of “fiery but mostly peaceful protests” following the justified non-fatal police shooting of armed sexual-assault suspect Jacob Blake in Kenosha, Wis., has been nominated for an Emmy award.

CNN correspondent Omar Jimenez was one of five nominees in the “Outstanding Emerging Journalist” category. A Washington Free Beacon analysis determined that the word “emerging” is a euphemism for “non-white.” Other nominees included Anna Kook of Al Jazeera Plus, the controversial media outlet funded by Qatari oligarchs, and Vice correspondent Paola Ramos, a “Latinx Communications Strategist” who worked on Hillary Clinton’s failed presidential campaign in 2016.

The Kenosha riots in August 2020 lasted nearly a week and caused tens of millions of dollars’ worth of property damage. Rioters took to the streets after a bystander posted a video of Blake’s encounter with police. Mainstream journalists repeatedly spread disinformation by describing Blake as “unarmed.” In fact, he was armed with a knife and was harassing his girlfriend who had previously accused Blake of sexually assaulting her. Blake survived the shooting, which occurred after two officers unsuccessfully attempted to subdue him with a Taser and repeatedly ordered him to drop the knife.

On July 28, The Hollywood Reporter reported the following:

”At a time when critical, monumental, and world-changing events are more immediately available and accessible than ever before, the work of the journalists and documentarians that bring us the truth of these stories is under tremendous assault. We honor these individuals’ courage and excellence of craft that allows each of us to be better informed and understanding of the issues of our day,” said Adam Sharp, NATAS (National Academy of Television Arts & Sciences) president and CEO.

Just to give you some examples of the nominees:

The Lead with Jake Tapper CNN