It is becoming obvious that someone will be thrown to the lions in the John Durham investigation. It will probably be someone (or someones) associated with the Clinton campaign. It may even include a Clinton (but I doubt it). The mob (many Americans) are demanding accountability, and some accountability will be provided. However, the root of the problem will never be dealt with.

The following is an excerpt from an article posted in The Conservative Treehouse on May 17:

As noted by Charlie Savage, prosecutor Deborah Shaw, a member of the Durham team, delivered the opening remarks to frame the government position in the case.

The telling remarks came early: “Shaw addresses “the elephant in the room” – tells jury their feelings about Russia, Trump, Clinton can’t play a role in the case. This is about “our FBI” which should not be used as a tool by anyone, Republicans or Democrats.”  In essence, prosecutor Shaw is telling the jury the FBI were duped into the Trump-Russia conspiracy investigation by outsiders connected to the Clinton campaign.

That’s a critical baseline from the government we must understand and accept.  That baseline now indicates that none of the DOJ and FBI operatives involved in the fraudulent scheme will be held accountable by the Durham team.  “Our FBI should not be used as a tool by anyone,” yet they were, so sayeth the United States Government.

There you have it folks.  For those who tried to avoid the uncomfortable reality of the situation. The Durham prosecution has set down the cornerstone establishing the DOJ/FBI was used and tricked.

The prosecution cannot later turn toward DOJ and FBI officials who were victimized by the Clinton outside group, reverse the predicate motive of the prior trial, and then hold the DOJ and FBI legally accountable.

The Durham accountability focus is now narrowed to the Clinton team, starting with Michael Sussmann.

This outcome was always visible when we accept the totality of the Robert Mueller probe as an overlay into this entire scenario.  Put into a question I have asked for two years:

Answer, they can’t.   If Durham were to connect the conspiracy of the outside government and inside government collusion, he would be penetrating an impregnable firewall that would take down multiple DC government institutions simultaneously.

Durham is being permitted to give the illusion of accountability, but he was not authorized or permitted to expose the Dept of Justice, Federal Bureau of Investigation, Senate Select Committee on Intelligence, or any other institution.

The vehicles of our justice institutions are rusted and broken.

Bill Barr was the Bondo application.  John Durham is the spray paint. 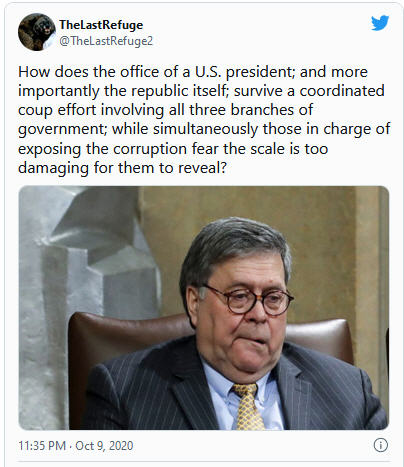 That’s where we are, folks. Until we pay closer attention to primary elections and un-elect the Washington swamp creatures, things will not change.