When Israel became a nation in May 1948, it was promptly invaded by all of its Arab neighbors. Israel was not able to maintain control of the entire city of Jerusalem, and part of the city fell into Arab hands and was controlled by Jordan. From 1948-1967 Jews were denied access to their holy sites by the Jordanians. In 1967, when Israel regained control of the entire city of Jerusalem, Christians, Jews, and Muslims were all given access to their holy sites. That is one illustration of the difference in the way Jews treat Arabs and the way Arabs treat Jews.

In 2001 Palestinian leader Yasser Arafat refused a deal brokered by President Clinton that would have established a Palestinian State.

The deal included the following (source: The Jewish News of Northern California):

control over some 95 percent of the West Bank, 100 percent of Gaza, predominantly Arab areas of Jerusalem (including the Temple Mount and most of the Old City), the Muslim holy sites and the limited return to Israel for at least some of the Palestinian refugees.

That is not all: The Palestinians would have been compensated for the missing 5 percent of West Bank territory with an equivalent area inside pre-1967 Israel, presumably in the Negev Desert, contiguous with the Gaza Strip.

Arafat refused the deal. Had he accepted the deal, he probably would have met the same fate as Anwar Sadat, who was assassinated after signing a peace treaty between Egypt and Israel.

It needs to be understood that the ‘Palestinians’ do not want peace with Israel–they want to drive Israel into the sea. The Palestinians are teaching their kindergarten children to be martyrs to reclaim Jerusalem. Below is a picture of a Palestinian kindergarten class. 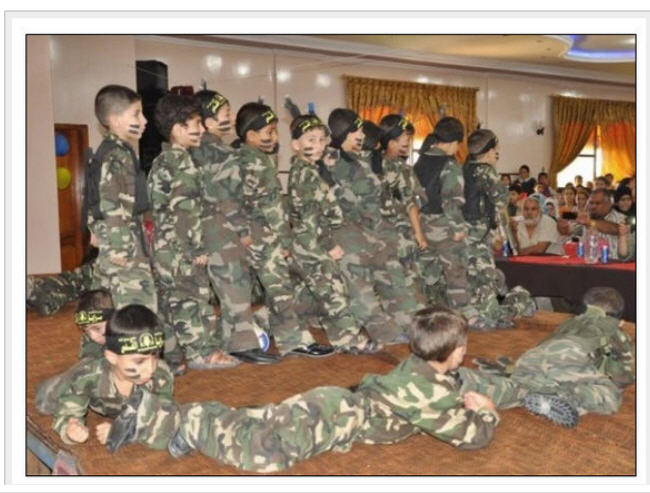 The Times of Israel is reporting today:

The intention of the U.S. Biden Administration to reopen a consulate for the Palestinians in Jerusalem should be a trigger warning for Israel.

The consulate was closed in 2018 by former President Trump when the U.S. embassy was moved from Tel Aviv to Jerusalem. The closure shut down our enemies’ hope for the division of Israel’s capital, a hope that will be revived if it is reopened.

A unilateral decision by the Biden Administration in that regard without Israel’s consent would not only contradict international law, but would also send a message that day by day we are giving up increasing control over almost everything —over Jerusalem and the territories, over the nation’s fabric and identity, over the exorbitant transfer of money to Gaza which afterwards transforms into weapons against us. We would be giving up on ourselves, on our right to be in the Land of Israel.

In Genesis 12:3, the Bible says, “I will bless those who bless you, and whoever curses you I will curse; and all peoples on earth will be blessed through you.”

The earth has been blessed by Israel–Israel has received more Nobel Prizes for scientific discoveries than any other nation. We put ourselves at risk when we work against the interests of Israel.