There were a number of odd things that happened toward the end of the Obama administration. There was the Susan Rice memo about the January 5, 2017, meeting (story here), the large number of unmasking requests (story here), but there is another odd thing that has just been discovered.

On Saturday The Conservative Treehouse posted an article about the ban on gain-of-function research.

…Eleven Days before leaving office President Obama’s administration re-authorized funding for the creation of biological weapons using SARS viruses. However, essentially this re-authorization was only kickstarting funding within the U.S. because the funding of weaponization of SARS-CoV-2 never actually stopped in 2014. The media reporting on this is misleading, if not downright false. 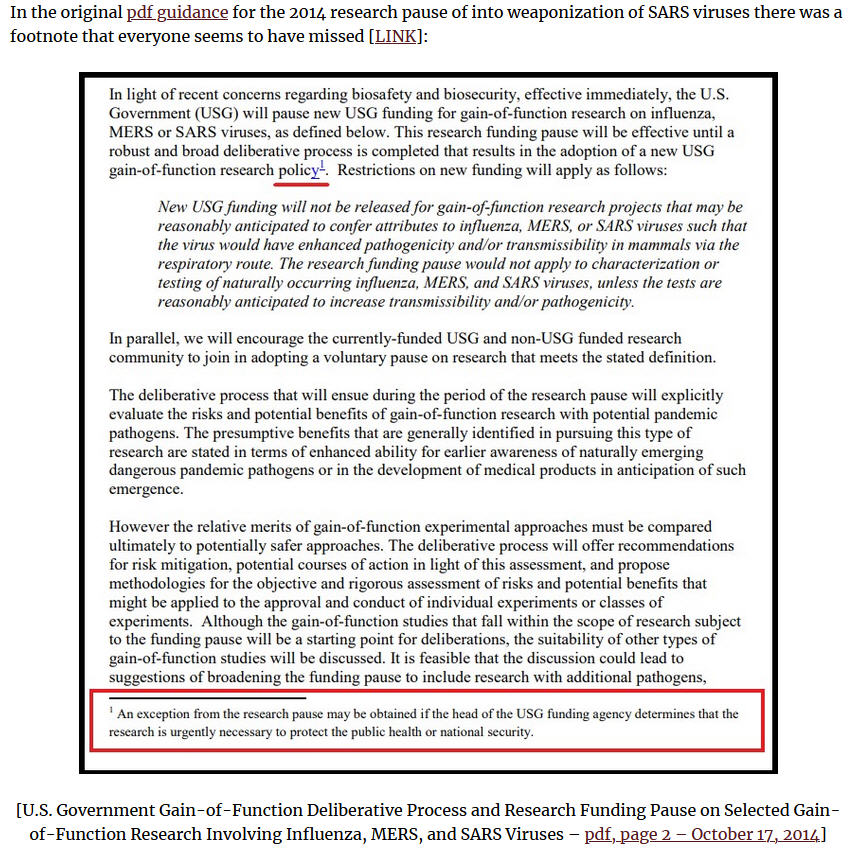 The article includes a summary of events:

SUMMARY: President Obama (not Trump) started the reauthorization of SARS-CoV-2 Virus experimentation in 2017.  The funding of the Wuhan Lab for the creation of SARS-CoV-2 was originated during the Obama administration and continued during the Trump administration.  The scientific community, the Obama White House and National Security Team, and the Pentagon knew the dangers of funding the weaponization of a biological weapon from SARS.  The COVID-19 pandemic was an outcome of these originating decisions.

…. and yes, there are political and ideological benefits from the perspective of Obama’s ideological group for unleashing the SARS-CoV-2 Pandemic as an opportunistic “crisis” to create totalitarian government solutions regardless of who was in office.  However, the timing of the subsequent biological release is very suspicious in relation to the 2020 presidential election and the downstream benefits of manipulating the election via mail-in ballots.

Perhaps not a smoking gun of intent, but definitely bloody footprints walking out the door – in Obama’s size.

Something to consider as you listen to the news.