There is some irony in this situation–the article at Red State shares a past Tweet from Jen Psaki:

This is what President Biden Tweeted when President Trump took out Qasem Soleimani in 2019: 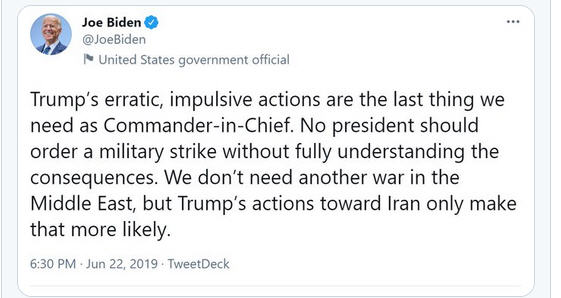 Never put your double standard in writing–it will come back and bite you someday.

The article at Red State concludes:

Of course, there’s a more serious question here, which is whether Psaki was actually right back in 2017. Let’s put aside the fact that Trump and Biden have both launched strikes. Should they have? I think as retaliatory strikes, the single operations are defensible. At the same time, our broader encroachment into Syria, which Trump tried his hardest to shut down but Biden has rejuvenated, is simply not.

As I’ve said in my recent critiques of Liz Cheney, it’s long past time for the uniparty that is our foreign policy complex to answer for many of the mistakes that have been made the last two decades. Rand Paul is correct when he says it’s time to force new authorization for any new military actions in the Middle East. This thing where every new president just does whatever they want is no how things are supposed to work, never mind the moral issues at play.

Unfortunately there are a lot of people who profit in war. We need to make sure they have very little influence in our government.